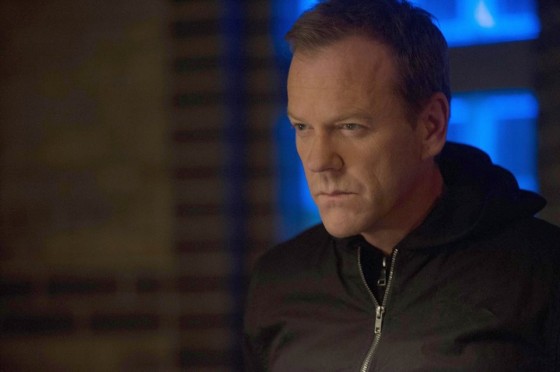 Jack, Kate, Chloe and Belecheck have one last chance to grab Cheng and prevent World War III in the incredible finale to Live Another Day.

After Stonlavich is killed in his fight with Mark, Jack and Kate ransack his office and Jack manages to find an encrypted cell phone with e-mails detailing the cargo ship Stonlavich hired to get Cheng and the override out of London.  Before they can go after it though, Cheng calls and forwards the feed of his sniper’s crosshairs trained on Audrey.  Mark flips out but Jack knows that they can’t sacrifice thousands for one person but Kate volunteers to go help Audrey while Jack and Belecheck get Cheng.  Both missions need to go without proper support so Cheng does not get suspicious.

On the way to the ship, Chloe calls Jack and offers to run ops for him at the ship, in order to make up for helping Adrian get the override.  Jack tells her it wasn’t her fault and they rendezvous with Belecheck at the docks.  And thus begins one of the best action sequence in 24 history as Chloe guides the duo via a hacked satellite while Jack and Belecheck systematically take out Cheng’s men and the Russians.

Back at the park, Kate finds Audrey and has her risk a quick move so that Kate can see where the sniper is and then she manages to take him out and she and her team prepare to move her back to CIA HQ but Cheng has another gunmen in the area and they are ambushed.  Kate takes out that shooter but they lose two men and Audrey is hit as well.  Kate tries to save her but Audrey dies on a park bench (and gets the silent clock treatment).  Kate has the unenviable task of telling Jack, who allows himself a few seconds to break down before going into full on rampage mode and takes out the rest of Cheng’s men and captures Cheng alive.  Immediately after getting a vocal and facial match at the CIA, Jack cuts the feed and decapitates Cheng with a nearby samurai sword.  Everything is seemingly resolved, as Heller, with the new evidence, is able to back down Chinese President Wei but he gets hit hard by Audrey’s death and collapses.  Jack and Belecheck go back to get Chloe, only to find her missing and evidence of blood on the floor.  Jack gets a mysterious phone call telling him to meet somewhere and 12 hours later, outside of London, Jack meets with a group of Russians and offers himself for Chloe.  On the walk across, Jack tells Chloe that she’s his best and last friend and then seemingly gladly heads off on a helicopter bound for Moscow.  Heller, meanwhile, recovers slightly and prepares to fly himself and Audrey’s body back to the US.  Things are definitely left open for another season and I am ready, as this was easily one of the best seasons of the show, easily an equal of the first five.  I think Day 4 is probably still my favorite because of the villains and how batshit insane things get.  If there’s another season where Jack has to escape from Russia a la A Good Day to Die Hard but actually good, I think that could be awesome.