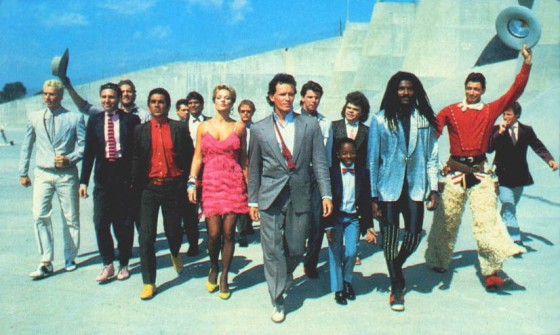 The singular movie that is The Adventures of Buckaroo Banzai Across the 8th Dimension turns 30 years old today, joining Red Dawn and Cloak & Dagger, all of which were released on August 10th, 1984.  It was initially a box office bomb but has since become a beloved cult hit.   There’s a ton of references, inspirations and random trivia about the adventures of everyone favorite rock star, surgeon, physicist, crime fighter.

Buckaroo Banzai: Man of Bronze: The general concept and characters of the movie are based on Doc Savage.  Buckaroo shares Doc’s exceptional skills in a variety of fields and his overall sense of good.  The Hong Kong Cavaliers, Buckaroo’s team, are also similar to Doc’s inner circle of allies.  Buckaroo is also supported by a massive network of amateurs and volunteers including the radio operators, the Radar Rangers, the Blue Blaze Irregulars help out in various ways and The Rug Suckers are an armed backup unit.

“Tonight only, Buckaroo Banzai and the Hong Kong Cavaliers!”: In addition to being the world’s greatest crime fighting team, Buckaroo and the Hong Kong Cavaliers are the world’s biggest music act.  Peter Weller is an accomplished musician and sang all his songs in the movie, as well as played guitar and pocket trumpet.  The band performs a reworked version of the 1958 hit, “Since I Don’t Have You” at the club where they meet Ellen Barkin’s Penny Priddy.  During the end credits when the team is walking in unision to the movie’s synthy theme song, the actual theme song was not ready yet, so instead, the group walked to Billy Joel’s “Uptown Girl”.

There’s tons of mythology left to explore: The movie, in James Bond fashion, tells viewers to look for the next Buckaroo adventure, Buckaroo Banzai vs The World Crime League, but because of the poor box office performance and the studio behind it, Sherwood Studios, going bankrupt, the sequel never happened.  It was supposed to feature Buckaroo’s arch-nemesis, Hanoi Xan, who runs the global crime syndicate and killed his parents and wife, Peggy.  Hanoi was mentioned in some dialogue in the movie originally but all references to him were deleted.  There was also a deleted scene were Jamie Lee Curtis played Buckaroo’s mother.

Citizen Banzai: The movie features tons of references and homages to Orson Welles.  The US President, President Widmark, looks and sounds like Welles and the infamous War of the Worlds radio broadcast is mentioned numerous times. 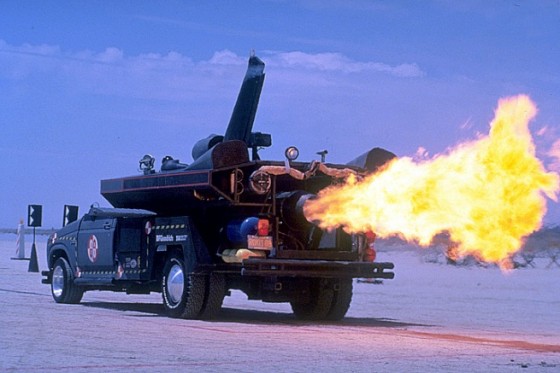 To the 8th Dimension and Beyond: What sets the whole plot of the movie in motion is Buckaroo’s jet car experiment that takes him into the 8th dimension and draws the attention of the evil Lectroid aliens.  The car was actually a 1982 Ford F-150 pickup truck, heavily modified of course, and included an actual cold war era General Electric jet engine. 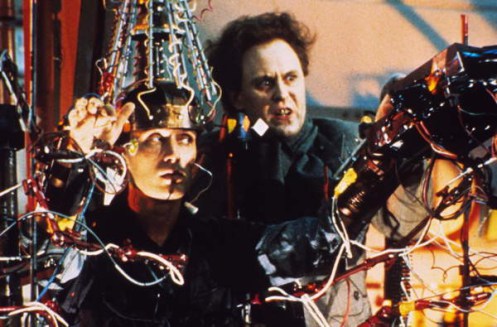 Third Rock from the Lectroid homeworld: John Lithgow plays John Whorfin, the evil alien leader in the movie.  Lithgow took his bizarre accent from the Fox lot’s tailor, Roberto Terminelli, who had a heavy Italian accent.  Whorfin  is not on screen for 42 straight minutes of the film after he escapes from the mental hospital he is being held in.  A quirk of Whorfin is misquoting famous quotes like “Home is where you wear your hat” instead of “Home is where you hang your hat”.