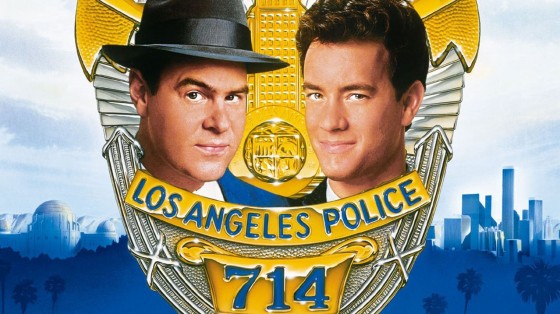 Even back in the 80’s, Hollywood was turning classic TV shows into the movies and one of them was Dragnet, with Dan Aykroyd taking on the role of straight laced, by the books detective, Joe Friday (actually the original Joe Friday’s nephew) and Tom Hanks co-starring as his slightly more hip partner, Pep Streebek.  The movie features a cult trying to poison the city, televangelists, virgin sacrifices and other assorted insanity but the strangest thing about the movie might be the fact that Hanks and Aykroyd recorded a rap song for the movie’s soundtrack.  Called “City of Crime”, it finds Friday and Streebek interrogating people in animal masks and the British rock/rap group, Art of Noise, who also contributed an updated Dragnet theme song.  There’s tons of awkward dancing and Tom Hanks not so much rapping as yelling hysterically.  Check out all the insanity below.