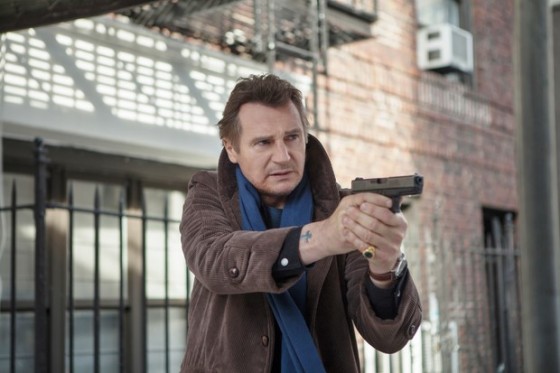 It seems like 2014 is the year of the “whodunnit?” for Liam Neeson, previously solving a murder mystery at 30,000 ft in Non-Stop and now diving into a gritty, disturbing murder investigation in turn of the millennium NYC in A Walk Among the Tombstones.

Neeson is Matt Scudder, a former NYPD detective turned unlicensed private investigator.  He’s hired by Kenny Kristo (Dan Stevens),  a wealthy drug dealer whose wife was kidnapped and murdered, despite his paying the ransom.  Kristo wants Scudder to find the men who did the crime and bring them to him and this sends Scudder into the seedy, grimy underbelly of NYC on the track for clues.  You can definitely feel the crime novel origins of the movie, as it’s based on one of the many Matt Scudder novels by Lawrence Block, as there’s a great, slow burn to the revelations and the usual red herrings of the genre.  There’s also supporting characters who feel like they show up in every book, like the desk manager at Scudder’s apartment or his new protege, the street smart orphan TJ (Brian “Astro” Bradley).  Comparing it to other movies and TV, it feels like the combination of an old school Bronson style investigation movie with True Detective’s disturbing crimes and it’s about as great as you would think from that combo.

Liam Neeson is firmly in grizzled mode in Tombstones, a recovering alcoholic who quit the force after a horrible shootout.  He does get to lighten things up a little bit in his interactions with TJ, which has some great meta conversations about what you need to be a good detective, like Sam Spade. Astro as TJ is suprisingly good, as his previous acting was in Earth to Echo and before that, he was a contestant on America’s Got Talent.    The villains are all incredibly creepy and effective, including one from the aforementioned True Detective.  Dan Stevens seems ready to break out this year after his stint on Downton Abbey, with an amazing performance here and also apparently in festival favorite, The Guest.

The movie really takes advantage of it’s setting, sending Scudder across all the borroughs of New York in search of the suspects and uses it’s 1999 setting well, except for perhaps a bit too much Y2K talk.  You should definitely not go in expecting tons of action, as it’s more about the investigation than shootouts and fights.  What action that is there is good but there’s a weird choice during the climactic scenes to do a weird start/stop editing style and intercut the action with all 12 steps of Alcoholics Anonymous.  It kind of kills the momentum of the scenes and adds some weird artistic spin on the movie that, up to that point, was pretty gritty and realistic in terms of the violence and style.

Overall, if you’re a fan of Liam Neeson and slow burn, old school mysteries, definitely check out A Walk Among the Tombstones.  It’s not the next Taken but it’s still a solid entry in Neeson’s recent ass kicking catalog and if there were more cases for Matt Scudder to solve, I would be interested.

A Walk Among the Tombstones Trailer