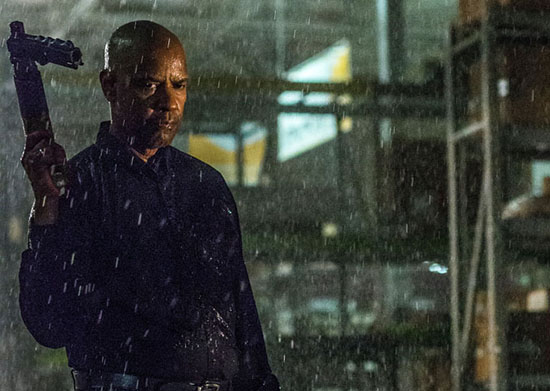 In what seems to be a somewhat annual tradition, Denzel Washington is back for another turn as a bad ass getting justice, this time with a remake of the 80’s action/adventure TV show, The Equalizer.

Directed by frequent Denzel collaborator Antoine Fuqua, The Equalizer finds Denzel as Robert McCall, a man with a mysterious past and deadly skills trying to live a quiet life in Boston, working at Home Depotesque store during the day and reading classic literature at a diner at night.  One of his fellow diner patrons, Teri (Chloe Grace Moretz) is a prostitute who gets roughed up badly one night by her pimp Slavi (Justified’s David Meunier) and Robert decides to break his vow to not get involved and goes after the Russians, which brings in mob fixer Nikolai (Martin Csokas).  When the movie actually switches into “equalizing” mode and Robert is taking down the mob, it’s exactly what you are going in expecting but the first half to two thirds is weirdly slow and focused more on Robert’s arguably OCD behavior and his weird life coaching to everyone around him.  What’s even stranger is that most of Robert’s weird personality quirks disappear about halfway through the movie and don’t even factor into the finale.  Robert also goes off on random other “equalizing” missions, like taking down corrupt cops or a guy who robs the home improvement store.  These don’t really factor into the main plot at all and just feel like padding when the movie probably could have just cut some time and gotten to the meat of Robert vs the Russian Mob a lot earlier.  Chloe Grace Moretz, who is the whole impetus for Robert to unleash his skills, also disappears after the first third of the movie and doesn’t show up again until the very end.

Robert McCall might be one of the more unusual bad asses Denzel has played.  As mentioned, he has some almost OCD like tendencies, like always timing how long things like taking down a room full of thugs takes or meticulously cleaning and arranging things at home and at the diner.  He also has the ability to analyze the room and threats a la Guy Ritchie’s Sherlock Holmes but even that doesn’t factor really into the climax, although the climax is easily the coolest and best part of the movie, as Denzel basically Batmans the Russian mob in the Home Depot.  Martin Csokas kind of steals the show as Nikolai, who feels like a Bond villain with his constant monlogues and his meticulous look and speech pattern.  Chloe Grace Moretz is good as usual but basically has nothing to do besides be the instigating action and it’s especially bizarre seeing her as a victim after her portrayal of one of the most bad ass superheroes ever with Hit Girl in the Kick Ass movies.

Action wise, once The Equalizer actually kicks into gear, it’s the usual brand of bad assery you would expect from Denzel, although it does feel like a sort of Man on Fire lite.  There’s a few extremely similar scenes to that film, including what almost feels like a parody of “Cool Guys Don’t Look at Explosions” scenes.  As previously mentioned, the final battle in the home improvement store is pretty fantastic, with Denzel utilizing a bunch of random products to take down the Russian thugs, including barb wire and a nail gun.  The one thing that takes away a little from the action is that Robert McCall’s skills are so high, there’s never really any doubt about whether he’s going to win or not, it’s just a question of how fast the bad guys are going to die.  That’s usually true for most action movies but not even Nikolai really poses a threat to Robert McCall’s particular set of skills.

Of the recent fall action movies, I would recommend November Man first, then Walk Among the Tombstones and then The Equalizer.  The Equalizer is not bad by any means but it just feels a little sluggish to get going and there’s just some weird character bits and pacing that keep it from matching the best Denzel action movies, like the aforementioned Man on Fire, or even last year’s 2 Guns.