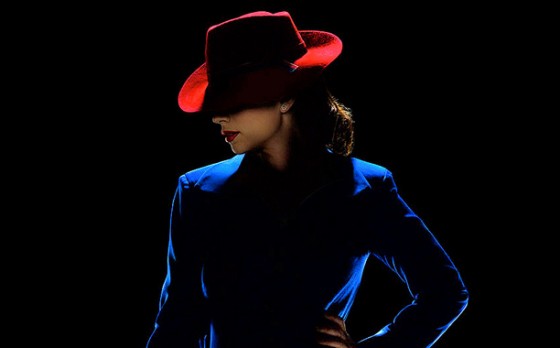 Shining in the first Captain America and her scenes this season in Agents of SHIELD, Hayley Atwell’s Peggy Carter finally gets the showcase she deserves with the 8 week event, Agent Carter, which debuted last night on ABC.  Set in 1946, Peggy is working for the SSR (the predecessor to SHIELD) in New York but is underestimated and belittled by her fellow, male agents, even though she’s obviously smarter and more bad ass than any of them.  Howard Stark (Dominic Cooper) gets himself into trouble when some of his most dangerous tech leaks out and Peggy is the only one who can help clear his name, but she’ll have to work secretly or else possibly get branded as a traitor like Howard is currently.  To help Peggy, Howard provides his butler, Edwin Jarvis and she sets out in the first two episodes on the trail of a dangerous new explosive Howard developed that causes massive implosions.  The show is tons of fun, with Peggy basically being the MCU’s female Bond and tons of fun period touches, like a Captain America radio show that annoys Peggy constantly with it’s portrayal of the character “Betty Carver”.  Check out the first two episodes below, thanks to Hulu.