Pilots are arguably one of the most important episodes in a TV shows run, it makes or breaks whether someone is going to keep watching, needs to set up the universe and tone of the show. Our new feature, Auto Pilot, is going to check out the first episode of shows to see how they stack up the rest of the series. First up, inspired by a recent Kickstarter reward I recieved, is the 1995 animated series, Skeleton Warriors 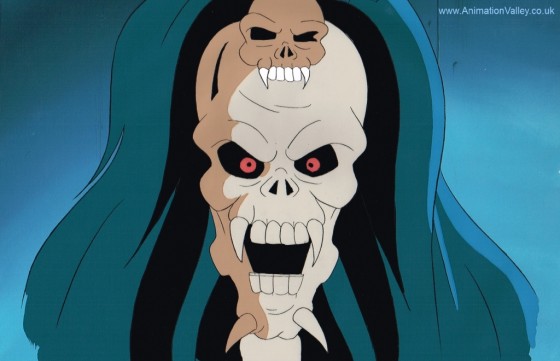 What Did I Know Going in?:  You’ve got a group of human warriors up against the evil Baron Dark and his gang of evil magical skeletons.  I saw the toys at KB and Toys R Us at various times through the 90’s but never had any of them or watched the show.

Even though Skeleton Warriors is a mid-90’s, almost everything about it screams 80’s, especially 80’s metal.  The entire show feels like it was inspired from some concept album or lost Iron Maiden cover art. The heroes, Justin, Josh and Jennifer Steele, all look like they are part of a glam metal band along with being the royal family of Luminaire.  Even Baron Dark, in the few minutes before his transformation into a skeleton, has an insane mullet.  The one thing that firmly sets it in the 90’s though is the CG narrator skull who appears at the beginning and end of the episode to recap and give some vague history or lesson.  The CG is firmly in the realm of Beast Wars/Reboot and pretty much instantly dates it the mid 90’s.

The basic plot of the first episode is that Baron Dark has influenced the younger of the Steele siblings, Josh, to help him steal the Lightstar Crystal, which powers the capitol city of Luminicity.  Josh has some last second doubts and he and the Baron are caught by Jennifer and Justin.  There’s a brief struggle and the crystal is shattered into two parts, with the Steeles keeping one and Baron Dark stealing the second.  The crystals also give the Steeles various powers (Justin can shoot energy beams, Jennifer can fly and Josh has his face warped into a skeleton but can also teleport through shadows) while the Baron is transformed into a seemingly invincible skeleton and he quickly turns his minions into skeletons as well (they all seem super psyched to have their flesh and muscle removed).  The Baron attacks and the Steeles flee to their uncle’s house, who has an entire arsenal ready to go.  There’s another battle and the Baron and his forces are temporarily stopped when Uncle Ursak seemingly detonates his house in what looks like a nuclear blast and he and his niece and nephews escape through an underground tunnel. Ursak also, apropos of nothing, decides to give the Steels nicknames, Justin is now Prince Lightstar, Jennifer is Talon and Josh is Grimskull and they vow to get the other half of the crystal and defeat Baron Dark.

It’s a pretty standard first episode for a 90’s cartoon, with the main thing that lets it stand apart is the character designs, which are still pretty awesome today, especially the Baron and his minions.  There’s also a fun future vibe to the show, with everyone riding hovercycles and hover cars.  Some enterprising person put the full episode up on YouTube if you want to check it out.