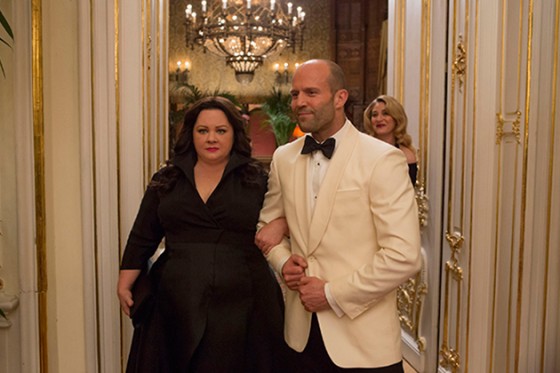 Spy managed to top the box office, although it was apparently neck and neck with Insidious 3 until Sunday, when it pulled ahead.  The movie was Paul Feig’s second best opening as a director and Melissa McCarthy’s third best opening, behind The Heat and Identity Thief but way up from last year’s bomb, Tammy.  The Heat is still the best opening collaboration between the two.

San Andreas dropped down to second with $26.4 million, about a 50% drop from last week’s winning weekend and it crossed over $100 million for it’s two weeks out.

Insidious Chapter 3 opened in third with $23 million, which is up from it’s horror competition, Poltergeist, but slightly less than half of what Insidious Chapter 2 made in it’s opening weekend.  It barely cost anything like the other Insidious movies, so another one will probably be on the way.

Entourage had a mediocre opening with only the die hard fans showing up, giving it $10.5 million and fourth place. Since it came out on Wednesday last week, it made $17.8 million, which is a slightly better opening than A Million Ways to Die in the West last year but it’s way off from both opening weekends for the Sex and the City movies.

Aloha took a massive dive following even more criticism and negative reactions during it’s opening weekend and went from sixth to ninth with $3.3 million.

Poltergeist is also bombing as well, barely staying in the top ten and losing over 1,000 theaters in it’s third week out and making only $2.8 million.