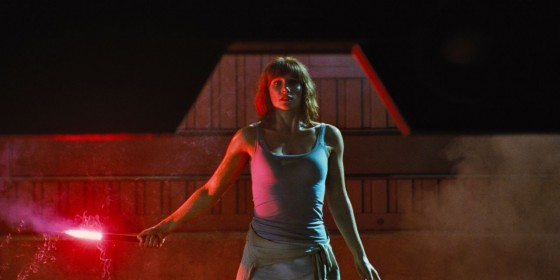 22 years ago, we were treated to “Jurassic Park”. A big event in and of itself, it was yet another successful blockbuster for director Steven Spielberg. With groundbreaking visual effects and excellent CGI for its time, “Park” was a monster hit that dominated the summer and sparked kids’ interest in paleontology for years to come. Dinos were suddenly in demand.

14 years after the last mediocre sequel one might ask: why bring back the franchise? Wasn’t the third film a sign it was all tapped out? Wouldn’t a new film so far apart from the others just be a sign that Hollywood has again run out of original ideas?

It’s easy to approach “Jurassic World” with at least a little trepidation. First off, Spielberg is back — but only as a producer and not in the director’s seat. That lucrative position goes to indie director Colin Trevorrow, who’s only film under his belt is 2012’s small-scale twee sci-fi “Safety Not Guaranteed”. Would a director who’s barely had his feet wet in the industry know how to resurrect a long-dormant blockbuster franchise?

The answer is a solid yes. “Jurassic World” doesn’t really break new ground but this is a good thing. In today’s age of bigger-than-life summer movies, Trevorrow and crew simply take the original “Jurassic Park” and kick it up even more notches.

The most obvious instance of not fooling around is the plot. Two young boys from Wisconsin go on a vacation to the island of Isla Nublar, home of a fully-functioning “Jurassic World”. That’s right, the park that was originally brainchild of Dr. Hammond is a reality. The boys are not only on vacation but also visiting their aunt who runs the park, Claire Dearling. Dearling (played by Bryce Dallas Howard) is viewed as an up-tight, numbers-over-emotions type of CEO in her interactions; she brushes off spending time with her nephews on her clueless assistant. Her focus is on making the park more successful and profitable than ever, even if that means playing God with genetics and creating a truly fearsome dinosaur: the Indominus Rex.

Of course, in classic “Jurassic Park” fashion, this gives everyone more than the bargained for. Enter suave raptor trainer Owen Grady, played pitch-perfect by Chris Pratt, who is the first to truly realize how bad of an idea a genetically-created super-saur is. Of course, everyone else is either oblivious or looking at it for personal or professional gain. Enter Vincent D’Onofrio as an InGen crony and B.D. Wong as the only original “Jurassic Park” cast; returning as geneticist Dr. Henry Wu.

What results is the same terror and fun that make the original such a delight. And I mean “same” in the most positive sense of the word. Trevorrow doesn’t reinvent the wheel here and works with the same heightened sense of danger that was nailed in the first film. The new wrinkles, such as a packed working park filled with frightened guests and an engineered dinosaur that eclipses the T. Rex, only take things up to another level. Not to mention he gets great performances from his stars. Let me just say that if they do go through with an Indiana Jones reboot, Chris Pratt is a more-than-acceptable choice to don the fedora.

Will “Jurassic World” make you forget the groundbreaking original, even if you factor out nostalgia? No. But in a summer loaded with blockbusters becoming more and more overstuffled (“Age of Ultron”, anyone?), “World” is a perfect indicator of how to go big without going overboard. Trevorrow knows his audience and delivers on what they expect. And while “World” is far-from-perfect with somewhat tacky lines and questionable character choices, it’s still a welcome addition to the summer movie onslaught. Long since extinct, this franchise is emphatically back.