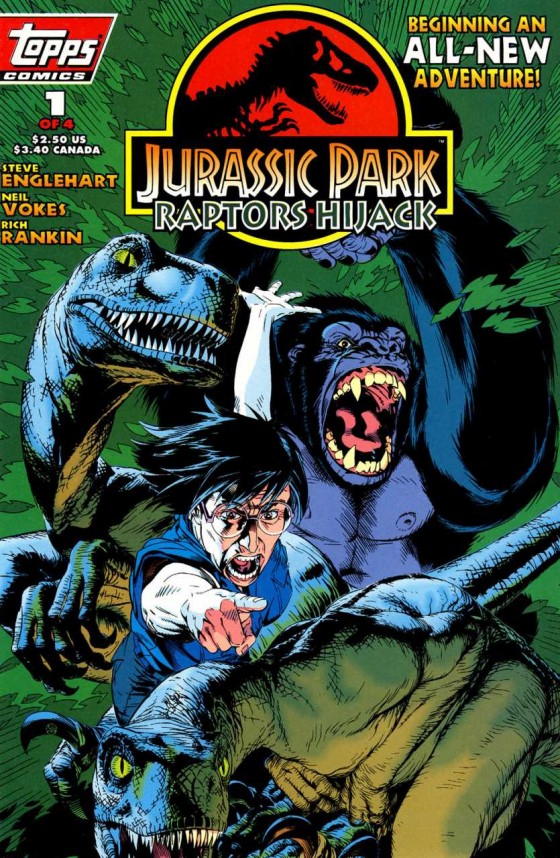 Picking up a short time after issue #4 of Raptors Attack, the surviving raptors, Alf and Celia, find themselves face to face with a gorilla, which should not exist in the South American jungle.  It turns out that the gorilla is part of an experiment by a primate behaviorist who then starts to learn the raptors way of communicating via sign language and also sees them starting to engage in mating behavior.

Muldoon, Grant, Malcolm and Sattler are trying to track the raptors via chopper and see the gorilla, prompting Muldoon to have them set down.  Ellie is captured by the gorilla, King Kong style, and has a second battle with the raptors, which ends with the gorilla being thrown over a cliff.  Ellie reunites with the rest of the group while the behavorist, Dr. Belvedere, manages to communicate with Alf and Celia with the signs she observed and learns that Celia is pregnant.

Meanwhile, kindly CEO of Ingen, John Hammond, orders a black ops raid against Biosyn as retribution for them hiring Nedry and basically causing the collapse of Jurassic Park.  In revenge for this, Biosyn CEO, Bill Steingarten, orders his men to kill Muldoon, Grant, Ellie and Malcolm and they attack them with an attack chopper.  Muldoon proves his bad assery by taking down the chopper and killing the Biosyn men with his bare hands.  Back with the raptors, Dr. Fischer, who was helping Grant and Sattler with the Jurassic Park cleanup, turns out to be Biosyn double agent and, now that Dr. Belvedere has the raptors calmed down, they plan on building a new Jurassic Park around them.

The Grant group reaches a friendly village, where they get help for Malcolm who’s going crazy from the fever of the jungle bug that was going around.  Ellie volunteers to stay with Malcolm while they wait for the Ingen chopper to arrive but the Biosyn forces blow up the chopper, and Grant and Muldoon get stuck in the middle of a river after having to jump away from the explosion.  Biosyn has also been building walls around the raptors in to create their own park, which will feature a bunch of new raptors as Celia has laid her eggs and they hatch into six baby raptors. 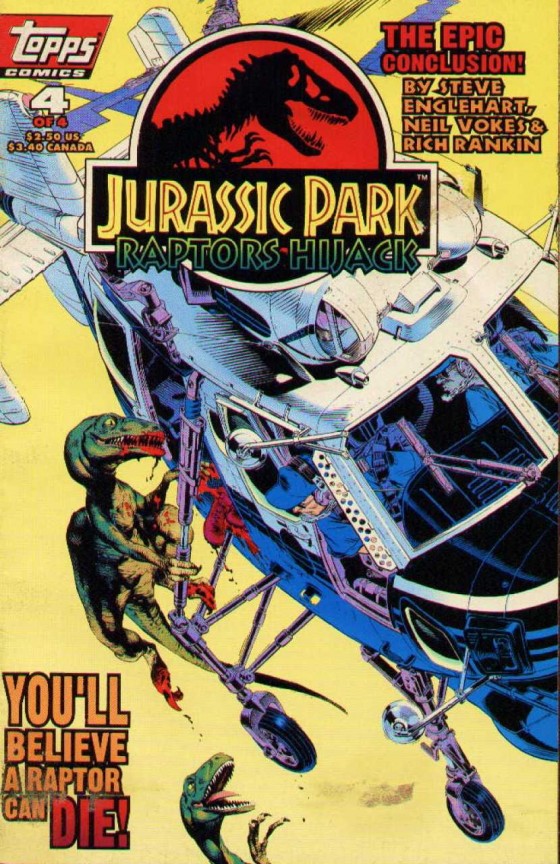 The joy of parenthood is short lived for the raptors however when they discover the walls around them and they get incredibly pissed but also determined to escape and they start to dig their way under the walls.

Malcolm and Ellie leave the safety of the village when it seems like Muldoon and Grant are taking too long to get back and they stumble across Biosyn’s new “park” just as the raptors escape and go on a rampage against the Biosyn forces.  Fischer and Belvedere are killed but Ellie and Malcolm are spared one last time by Celia for Ellie’s kindness to her treating her neck wound.  Another Ingen chopper finds Malcolm and Ellie and they make the choice to rescue Grant and Muldoon from the river instead of tracking the raptors, letting them escape for seemingly good into the South American jungle.  Back in civilization, the group decides that now it’s up to nature to sort things out and they leave the raptors to live wild in the jungle.

So that’s the epic story of Jurassic Park: Raptor.  It’s full of crazy moments and ridiculous plot developments, but that’s what makes it fun.  You can get them collected in the Classic Jurassic Park Vol. 2 and 3 trades or the single issues are probably pretty cheap on places like eBay or at your local comic store/convention.