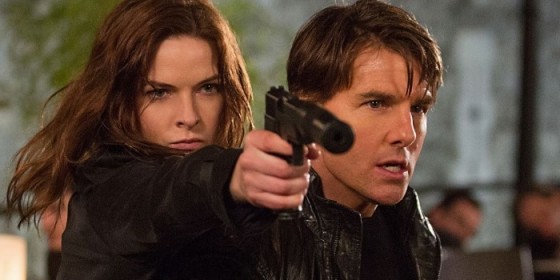 Much like the Fast & Furious series, the Mission Impossible series has only gotten bigger and better as it goes on and Rogue Nation is a fantastic entry, although I think Ghost Protocol, to me, might edge it out.

Ethan Hunt (Tom Cruise) and the IMF team are off the grid yet again as Ethan obsessively hunts The Syndicate, a group of rogue operatives who are launching a series of attacks that seem to be trying to disrupt global financial and governmental systems. He meets a mysterious operative named Ilsa (Rebecca Ferguson), who’s actual intentions are unclear but she may have the key to taking down The Syndicate.  Ferguson is incredible in what is basically her first movie, a bad ass who constantly keeps you guessing about whose side she is on and the equal of Ethan in pretty much every department, and even outclassing him in some of the action sequences (she even gets to take on the main henchman instead of Ethan).  Sean Harris as the villainous Solomon Lane is a vast improvement over Ghost Protocol’s villain and his gimmick is that he has an uncanny ability to predict human behavior, leading him to be one step ahead of Ethan for most of the movie.  Simon Pegg, Jeremy Renner and Ving Rhames are on hand as the IMF backup team, although Pegg’s Benji is in the field and at Ethan’s side for most of the action in the movie, with Rhames going back to his role as the team’s computer expert.  Alec Baldwin rounds out the cast as the scenery chewing CIA director, Hunley, who wants Ethan’s head after he successfully gets IMF dissolved.

Tom Cruise’s insane airplane stunt was what stole the headlines going into Rogue Nation and what’s crazy is that it’s right at the beginning and there’s plenty more action after that.  There’s a fantastic, tense sequence during an opera where Ethan has to hunt down assassins backstage and the big “heist” sequence of the movie involves Ethan having to infiltrate an underwater vault full of sensors that force him to have to hold his breath.   There’s also an amazing car chase that transitions into one of the coolest high speed motorcycle chases of recent memory.  None of these sequences feel as massive as the Kremlin infiltration or the Burj Khalifa climb from Ghost Protocol but Rogue Nation’s “smaller” set pieces keep it moving at an excellent clip.

Ghost Protocol, in my opinion, has the advantage of the better set pieces but the introduction to action heroine Rebecca Ferguson and a better villain make Rogue Nation an extremely close second in the MI franchise.  Tom Cruise is still an awesome action hero and his crazy insistence on doing his own stunts is unequaled.  If you’re a fan of the series and you haven’t gone to see this yet, go now.