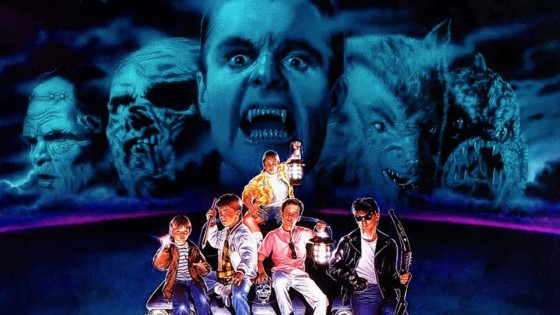 It’s October and that means it’s time for something horror related for this month’s Movie of the Month.  We could have picked one of the classic Universal monster movies but why choose one when you can get all of them up against a team of spunky 80’s kids with the horror/comedy classic, The Monster Squad.

Directed by Fred Dekker, who also directed the similarly themed Night of the Creeps, the movie has become an 80’s cult classic and lines like “Wolfman’s got nards” has entered into pop culture forever.  Shane Black actually co-wrote the script with Dekker, which is probably why it’s got so many classic quips and one liners.  Apparently, Black’s first draft featured a sequence where Van Helsing leads a massive army and zepplin fleet against Dracula’s castle for the opening but it would have cost more than the entire budget of the movie, so it was obviously scrapped.  Some other fun facts include the fact that Liam Neeson was in consideration to play The Wolfman and that the Wolfman’s face was modeled after special effects master Stan Winston.

Monster Squad is available right now on Netflix and we’ll be watching it at the end of the month, just in time for Halloween.

Movie of the Month: Way of the Dragon