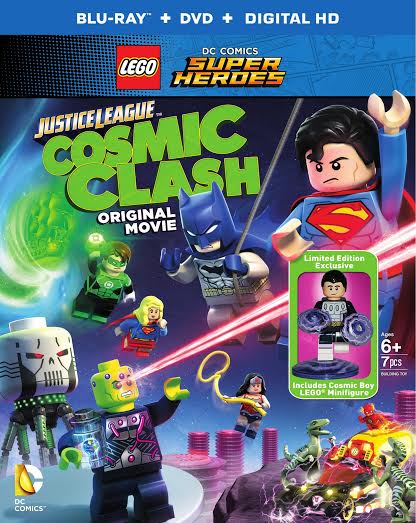 With the increasingly dark and gritty live action and animated movies coming out of DC, it’s nice to remember sometimes that it’s also supposed to be, you know, fun, which is why the LEGO DC movies have been a great counterpoint.  The third entry in the series, this time the Justice League is up against Brainiac (Phil LaMarr), who arrives looking to add Earth to his collection of planets.  He scatters the members across time, leaving Flash(James Arnold Taylor), Batman (Troy Baker) and Cyborg (Khary Payton) to use the Cosmic Treadmill to find them while the Legion of Superheroes (Supergirl, Saturn Girl, Cosmic Boy and Lightning Lad) hold off Brainiac.  The voice cast, which is basically the best of the best every time, also features Nolan North, Kari Wahlgren, Yuri Lowenthal, Phil Morris, Grey Griffin, Jessica DiCicco and Josh Keaton.  The movie is out in March next year on Blu Ray and DVD, March 1st to be exact, and it includes a special Cosmic Boy minifig.  The movie will also be streaming starting February 9th.  Check out the trailer below (and hey, we also talked to Troy Baker, Phil LaMarr and more about the movie at NYCC this year, check it out: https://www.everythingaction.com/2015/10/19/ea-at-nycc-2015-lego-justice-league-cosmic-clash/).