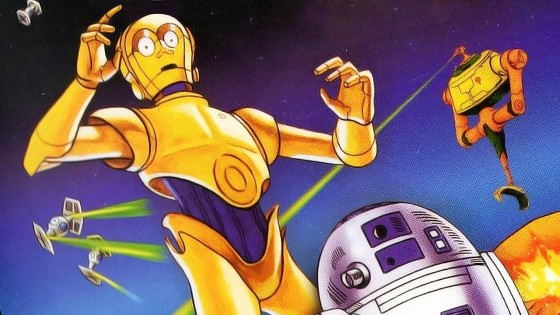 After Return of the Jedi, the prequels were just a twinkle in George Lucas’ eye and the 14 years before they premiered were filled with all sorts of strange and crazy expanded universe games, books, comics and, our focus today, cartoon series like Star Wars: Droids.

Did I Know Anything Going In?: I know it existed but had never seen any episodes.

If you could have a cartoon series that could focus on any characters from the Star Wars universe, C3PO and R2D2 probably would be toward the bottom of the list but I guess their harmlessness and kid friendly appeal (and the fact that Anthony Daniels will show up literally every time 3PO is in something) resulted in the 13 episode one and only season of Star Wars: Droids.

I guess technically it’s now a Star Wars Legend as far as the canon goes but Droids is set between Revenge of the Sith and A New Hope, as 3PO and R2 are tossed between masters and get into all sorts of hi-jinks involving speeder racers, bounty hunters, the Empire, crime bosses and more.  In this first episode, the droids are jettisoned on the planet Ingo by their last bounty hunter master and are rescued by a pair of friendly speeder racers, Thall and Jord.  Their dream is to get their speeder, The White Witch, off world so they can race and think that with R2 and 3PO’s help, they can achieve this.  However, they draw the attention of local crime boss Tig Fromm, who is secretly building a weapon to take over all the the other gangs on the planet.  Jord is kidnapped and Thall, R2, 3PO and secret rebel agent Kea Moll all head out to rescue him.  They break into Tig’s base and manage to outsmart his droid army and manipulate his security so that Thall and R2 can pilot the Witch through an elaborate tunnel system and rescue Jord, managing to blow up the base and temporarily ruin Tig’s plans in the process.

If you’ve seen the Star Wars Holiday Special (which no one should ever watch if they want to maintain their sanity), you probably remember the animated segment that introduced Boba Fett into the Star Wars universe.

The animation style of Droids is similar but a little better but it’s still kind of terrible.  3PO and R2 are bizarrely flexible and almost rubbery, despite the fact that they are metal and 3PO especially is much more nimble than his live action alter ego, running and jumping all over the place.  That’s balanced out though by the fact that he’s a clumsy idiot.  If you want to get trashed with a drinking game, take a shot every time 3PO trips or stumbles in this episode but the crazy part is that this usually results in his saving the day or solving a problem.  He does have some slightly clever attempts to bluff the enemy droids, much like he did in A New Hope when he and R2 are discovered by the Stormtroopers on the Death Star.

Kids today are pretty spoiled with their Clone Wars and Rebels because Droids is pretty rough.  The animation is terrible and it’s one of those shows that keeps repeating important bits because they think kids are stupid.  It might be worth watching as a curiosity or if you need to see everything Star Wars but just stick with the new cartoons for a more proper Star Wars fix.