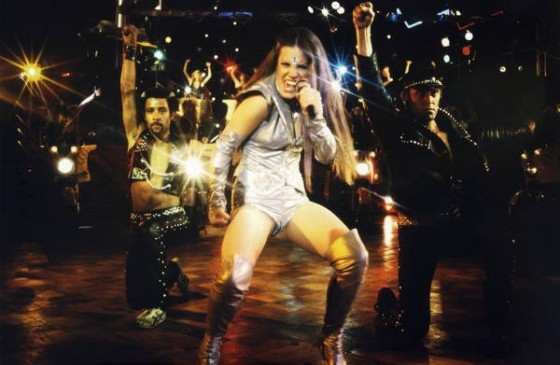 The Cannon Group is best known for their wonderfully cheesy 80’s action movies like Enter the Ninja and Invasion USA but shortly after purchasing the company, cousins Golan & Globus unleashed the insanity of The Apple as their major US debut film.  Golan took the story from a married couple who were former Israeli rock stars who envisioned a rock n roll version of the Biblical story of Creation for the stage but Golan convinced them it needed to be brought to the big screen and that’s when things went off the rails.  Plotwise, the movie is set in the far off future of 1994 when the evil organization BIM has seemingly taken over but, for some reason, they still need to compete in some sort of singing competition to have their song be the official song for a mandatory hour of exercise every day.  They almost lose to a folk duo named Bibi and Alphie, who the evil Mr. Boogalow (who is also probably The Devil) tries to sign to BIM and corrupt them.  Alphie refuses but Bibi gives in and things only get crazier from there.  As far as the music of this rock opera, it’s a combo of on stage music and full blown musical numbers where everyone is singing and dancing, including the titular song that takes place in Hell and the most unsubtle sex song in movie history.  Check out all the musical madness below.

How to Be a Master

Hey Hey, BIM’s On the Way

Musical Montage: Weird Al “This is the Life”