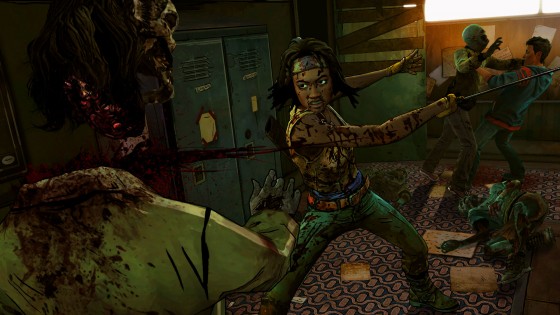 The latest Telltale adventure just came out and we got the chance to check out a bunch of awesome indie games as well for this edition of Gamebox 2.0

The Walking Dead: Michonne Ep. 1 “In Too Deep”: The latest Telltale series has arrived with another entry in the company’s excellent Walking Dead games, this time focusing on everyone’s favorite sword wielding badass, Michonne.  Voiced by Samira Wiley from Orange is the New Black, this new series fills in the gaps between issues 126 and 139 of the Walking Dead comics, where Michonne left Rick and the group to deal with personal issues and then came back.  In this first episode, you learn that Michonne is trying to deal with the guilt of losing her daughters and trying to move on with a new group aboard a sailboat.  She and Captain Pete head to a marooned ferry when the boat gets stuck on another wreck but soon find another group of survivors already scavenging on board and things get out of control in typical Telltale fashion.  The main things I noticed since playing most of the Telltale series is that they’ve revamped the action sequences for Michonne.  The button prompts come up much more dynamically and stylishly and the screen goes into widescreen whenever the action starts.  There’s also a terrific dialogue sequence where Michonne is being interrogated by the leader of another group and the answers she gives are used against another person brought in, and you have to decide if you or they will take the punish of a wrong or mismatched answer.  The only downside is that is is possibly the shortest episode I’ve seen from Telltale, coming in at maybe 90 minutes and it’s only 3 episodes total, so if you are looking for a more involved experience and haven’t played either previous full season of The Walking Dead, maybe check those out first before diving into Michonne but if you have played those, this is seems like a pretty great way to pass the time until a proper third season.

Beat Da Beat: Beat Da Beat is coming out on March 11th from Nekki and I got the chance to play it early and, if you like bullet hell shooters, this one is going to be right up your alley, as it’s punishingly tough.  Each level is set to the beats of a specific song and the enemies and bullets pulse out to the music and, if the beat gets moving, you are going to have to navigate an onslaught of pixels.  You earn credits from defeated enemies and you can upgrade your ship or buy new ones as you go along.  The game seems like it’s less about defeating enemies though and more about learning the songs and the patterns to progress.  The enemy patterns don’t change if you die on a level, so you can definitely start to memorize what is coming when.

Dungelot: Shattered Lands: Developed by Red Winter and published by Tiny Build, Dungelot: Shattered Lands is a rogue like dungeon crawler with a twist.  Instead of directly controlling your hero in the randomly generated dungeons, you have to uncover tiles sort of Minesweeper style and under each tile could be nothing, could be a treasure or item or could be a monster.  For each dungeon, you have to survive a certain number of floors and you have to uncover a key on each floor to get out.  The game has a great sense of “pushing your luck” because you could uncover the key super early and you could leave immediately or stay and try to find some treasure, but you also risk uncovering a monster that could sap your health.  You start out with a cleric but can unlock other heroes like a vampire, a bard and a witch as you go along.  If you like games like Rogue Legacy, this is a fun twist on that style game.

Forced Showdown: Taking two vastly different style games and somehow making them work together in a fun, unique way, Forced Showdown from Beta Dwarf takes the game show framing and twin stick controls of Smash TV and combines it with the deck building and card playing mechanics of Hearthstone and both sides work great.  You choose a champion and enter into tournaments where you have to fight a series of battles to get the chance to fight a boss, such as the machine gun wielding Ratbo, and each round, you gain an additional point of mana and a new card for your hand that you can play to buff your champion, get new abilities or add some sort of item or helper creature.  You can manage and build custom decks just like you can in Hearthstone and there’s some great Smash TV style quotes from the announcer and your champion, including lots of movie quotes.  The game is out on March 29th.

HeroDefense- Haunted Island: Tower Defense is a huge genre on all platforms and HeroDefense- Haunted Island is a step up from a lot of the other games in the genre I’ve played by focusing on hero characters with tons of available upgrades and skills.  Fighting the undead forces of the evil Count Necrosis, you form a team that includes a vampire slayer, a gravedigger, a pyromaniac, a half-werewolf and a resurrected monster bride, all of whom have unique abilities and are useful against specific mobs of creatures who travel down the set paths of the levels.  After each level, you work to rebuild your home village and level up the heroes skills, weapons and their charge abilities, which unlock during the levels when a certain number of gems are collected from the enemies.  I usually get bored fairly quickly with tower defense games but Haunted Island makes you more engaged by not just have you set towers and watch, you actually have to maneuver your heroes around the maps as the enemies spawn on different paths.  This game gave me that “just one more level” feeling that makes you play a game for way longer than you planned to.  It’s available now on Steam.

Futurama: Game of Drones: Coming out recently on mobile devices, the Planet Express crew is back with a match 4 puzzler, Game of Drones.  Professor Farnsworth creates a swarm of new delivery drones for Planet Express, but they still need guidance from Leela, Fry and Bender in order to deliver packages properly.  MomCo gets word of this and unleashes their own swarm of evil drones and things escalate in typical Futurama fashion. Although it’s skeleton is a pretty basic gameplay style, Game of Drones has a lot variety in terms of the objectives of each level, sometimes you are trying to get a certain amount of colors, sometimes you have to remove specific tiles or items on the board and sometimes you are trying to drop items from the top to the bottom of the screen.  The way the drones fall after a combo is cleared leads to a ton of satisfying, high number combos and the Futurama crew is on hand to help with unique power ups for each character and there’s motion comic cutscenes telling the story.  It does have some of the Candy Crush style walls where if you fail a level, you either have to use energy to continue or, if you are out of energy, pay real money to keep playing, but it’s free to try out on your iOS or Android device of choice.