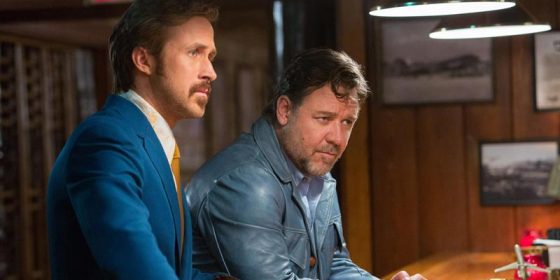 After going huge with Iron Man 3, Shane Black is back to his buddy action roots with the fantastic, and hilarious, noir action/comedy, The Nice Guys.

Russell Crowe plays muscle for hire Jackson Healy while Ryan Gosling plays PI Holland March.  The pair cross paths when a girl named Abigail hires Healy to stop March from following her but the duo learns there’s a lot more going on and slowly discover a conspiracy that revolves around a particularly important porno movie.  Gosling and Crowe have shockingly great chemistry and their banter is easily the highlight of the movie, with some great Shane Black dialogue and tangents.  Crowe plays more of the straight man as the more professional and cool Healy while Gosling puts on a masterclass in drunken clumsiness and dumb luck, as March keeps falling ass backward into dangerous situations or, in rare cases, the next piece of the puzzle.  Playing the Penny to Gosling’s sauced Inspector Gadget is Angourie Rice as his daughter Holly, who is also excellent and is usually the most competent member of the trio, even holding her own against the various assassins that get sent after the The Nice Guys, including an icy and deadly Matt Bomer and another by none other than Keith David.

Finally, the action is great as well, another staple of Black’s movies.  There’s two excellent shootouts, including the climactic one that takes place at the 1977 LA Auto Show and they all have great comedic touches along with the technical prowess on display (In the big finale shootout, for instance, Gosling hides behind a car that’s rotating and when he pops up to shoot, his back is to his target).

If you’re a fan of the movies Black wrote, like Lethal Weapon, or his previous directorial effort, Kiss Kiss, Bang Bang, you’re going to probably love The Nice Guys, as it’s everything you would expect from Black: dark humor, great banter between the two buddy “cops”, lots of pop culture references and great action.  Gosling and Crowe are hilarious together and the setting is a blast as well.  It’s definitely a must watch.

Shane Black is Back with The Nice Guys (Red Band Trailer)