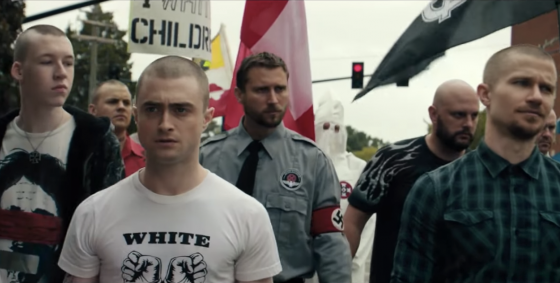 Although he’ll always be associated with Harry Potter, Daniel Radcliffe has been doing a ton of different roles post Hogwarts, like playing a farting magical corpse in the indie sensation Swiss Army Man, a villainous tech billionaire in Now You See Me 2 and, later this summer, an undercover FBI agent.  In Imperium, Radcliffe plays Nate Foster, who is tasked by the Bureau to go undercover with a group of radical white supremacists they believe may be plotting some sort of domestic terrorist attack.  Foster has to try and gain the trust of the group without losing his beliefs or morality and it looks pretty intense.  Toni Collette plays Foster’s handler at the FBI and Burn Gorman, Nestor Carbonell, Tracy Letts and Sam Trammell co-star.  It’s directed by Daniel Ragussis in his directorial debut after doing a few short films and it’s out on August 19th in theaters and VOD.  Check out the trailer below.

The Horrifying World of Food is Revealed in Sausage Party (Trailer)

Mel Gibson is Back in Blood Father (Trailer)