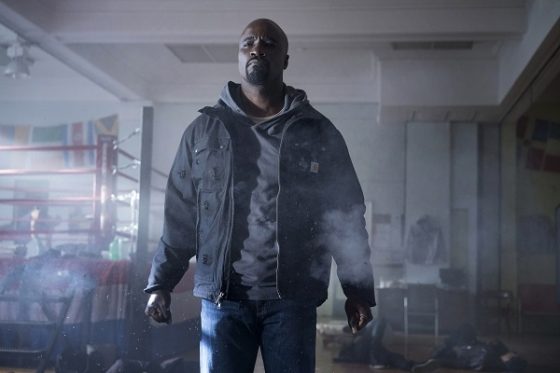 Netflix/Marvel had a huge panel at SDCC for their Marvel shows with a ton of new footage and news.  Daredevil was renewed for a third season that will most likely arrive in 2018 along with possibly Jessica Jones Season 2.  Next year we’ll get Iron Fist and The Defenders but the most imminent series is Luke Cage, which arrives in September and which got a trailer:

It looks like Daredevil isn’t the only one who will get awesome fight sequences.

There was also the first look at Iron Fist, which stars Game of Thrones’ Finn Jones as mystical martial artist Danny Rand, who is taken in by a mysterious group of warriors after his parents’ plane crashes in the mountains:

Finally, there was a tease for The Defenders and the logo for the show was revealed.  The Defenders is apparently shooting this fall and will arrive next fall on Netflix and it seems like it may resolve or at least continue the Black Sky/Hand storyline from Daredevil, as there’s voiceover from Scott Glenn’s Stick at the end of the teaser.

There wasn’t too much new info about the show I think we’re all most excited for here, which is the solo Punisher series, but Jon Bernthal did show up and confirm it’s still on.

Luke Cage May Have Met His Match in Season 2 (Trailer)