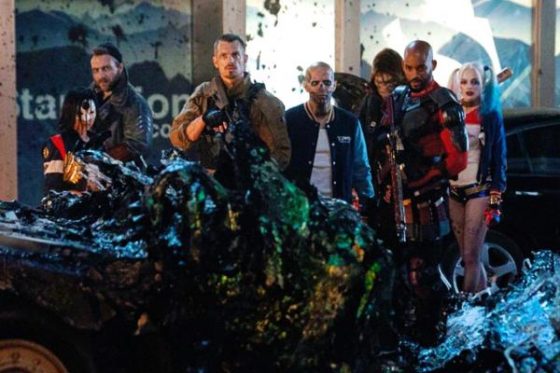 I’ve seen Suicide Squad. And I’m going to tell you what I thought of it. Before I do, there’s something I want to get off my chest…

I don’t get critics. Never did, never will.

But that’s the thing… I’ve never cared. Not once have I been so influenced by a critical review that I rushed to — or stayed away from — a film, flick, or movie.

So why read my review? Because I’m a fan, not a fanboy. I paid for my ticket willingly — I wasn’t forced to see the movie and write a review with some arbitrary word count that captures the attention span of a certain demographic.

It isn’t my job to look “too cool” or impress you with a snarky critique. That model sucks. And it’s not what we’re about.

Suicide Squad kicks off exactly the way it should: With a grim, cold look at the black site/prison the soon-to-be members of Taskforce-X are being kept at. It is a place where people go to disappear. Just like Amanda Waller famously says in the first trailer, “I put them in a hole… And threw away the hole.”

That comes through from the opening minutes of the film. But so does this movie’s heart.

We’re briefly introduced to each character, just as you’d expect. We see what makes them tick, what makes them dangerous. But we also see their weaknesses. The things that make them (meta) human. Things Amanda Waller (Viola Davis) will exploit whenever the opportunity presents itself (which, as you correctly guessed, happens a lot).

To their credit, just about every character is memorable. Even the prison guard, Griggs (Ike Barinholtz) has a soul to him. In fact, he’s a highlight of the movie early on. But I don’t even feel like that’s a fair statement because I genuinely thought everybody was.

Margot Robbie is God’s gift to comic book fans. She is the perfect Harley. And it’s evident early on. Her introduction was among my favorite scenes in the film. If you’re one of the people who complained about seeing Batman’s parents get shot in Batman v Superman, you probably won’t enjoy this. (If you don’t understand why these events are important, I can’t help you.) But if you’re a fan of Batman: The Animated Series and Harley’s overall history in all things Batman-related over the last almost (Jesus) 30 years, you’ll likely be pleased.

But just as much as Harley, Will Smith’s Deadshot stands out as one of the best things this movie has going for it. He’s the ruthless, badass assassin that made him a force to be reckoned with in the DC Universe, and one of Batman’s deadliest foes. But he’s no killing machine. Well, he is. But he’s human.

Will Smith, unsurprisingly, makes the character the coolest guy in the room at any given time. He’s funny. He has an air of arrogance about him you’d expect from the world’s greatest marksman. No doubt about it, he’s a bad guy. But he also has a daughter, whom he supports with his dirty line of work. She exposes his heart, gives him something to fight for, and is the reason he emerges as an unlikely — but wholly capable — “captain” of this band of deadly misfits.

Captain Boomerang (Jai Courtney), Killer Croc (Adewale Akinnuoye-Agbaje), and Diablo (Jay Hernandez) don’t get quite the same attention. For instance, considering his fairly minor (but still awesome and important) role in the film, Croc doesn’t require the sort of intro Harley does. Still, each of their introductions are still extremely satisfying. Especially Captain Boomerang’s.

Enchantress (Cara Delevingne) and Rick Flagg (Joel Kinnaman) go hand-in-hand. Literally. Without giving too much away, this goes back to what I said earlier about Amanda Waller… And it sets up the motivations for the entire rest of movie.

No spoilers… BUT… Let’s just say that after Task Force-X gets its unofficial/official greenlight from the military, it isn’t long before a certain 6,000-year-old spirit goes rogue despite the sharp, sinister planning of Amanda Waller.

This is the real inciting action for the movie. Weird, violent stuff is happening in Midway City (the go-to point of destruction in the DC Universe). So it isn’t long before Task Force-X is off to the races.

From here, the movie becomes the team-up story you expect it to be. And that’s a good thing. The movie isn’t a series of missions. It all takes place in “real time” (or what feels like it). The evolution of the team is fast and brutal, hardened by life-or-death (people die) combat  — against an enemy they didn’t know they would be facing — next to complete strangers.

What’s cool about this approach is that you see bonds form and break. You see tension put on new relationships and issues of trust that come with life-or-death consequences. Throw in some twists and “ouch, my feels” moments, and you have a fairly linear, point A to point B story. But of course, it isn’t that simple.

“With the Joker, it never is.”

And speaking of the Joker, Jared Leto crushed it. I’m not sure why he’s getting a “meh” response from critics. I suspect fans will not have the same response. This is the Joker from the recent comics, but with a lot more tattoos. He feels like more of a gangster than supervillain. That may not sound appealing, but in the context of the film, it makes a lot of sense.

To be quite honest, the whole movie feels like a big, kick-ass music video at times. But not in a bad way. I think that’s why this version of the Joker is slow to catch on. It’s different, and that takes time to sink in.

One thing I will say about the Joker is that a lot of his scenes were cut from the film, according to Leto. I’m not happy about that, but I understand and respect the decision. This is not a Batman movie. It’s a DCU movie. And while both Batman and the Joker make their presence felt (Joker is an integral part of the plot, though not the main villain, as some outlets had speculated), they do not overpower the main characters. Restraint is an art, and I think they did a fine job.

For that reason, I have to touch on the marketing of this film. In my opinion, it was not at all misleading. This is a fun, dark, funny, action-packed, cheesy-by-design (at times), and ultimately satisfying movie. Nobody who saw a trailer or recent TV spot will feel hoodwinked. What you’ve seen from the marketing is what you ultimately get.

There are moments of nerdgasm-inducing brilliance. But there are also “studio moments” that you can smell from a mile away. I’m ok with that. After all, it’s supposed to be a summer blockbuster. Studios don’t invest that kind of money without including test audience pleasers and fodder for TV spots.

But even in the most cringe-worthy of moments, of which there are very few, I was never offended.

In all, Suicide Squad was a lot of fun. And it accomplished its mission. No, not to “save” or even “correct” the DC Cinematic Universe. That’s not the point. What it did was create a living, breathing DCU that feels like it matters. That’s something Batman v Superman failed to do. And, just as Marvel has accomplished with years of smart filmmaking, fans will want to see every DC movie that comes out if for no other reason to see how it advances the greater storyline.

Will Deadshot cross paths with Aquaman? Will Harley show up to challenge Flash somehow? Perhaps the under-used (and, to be honest, poorly explained) Katana will leave a trail of blood through Gotham? Who knows. But that’s the beauty of it.

This movie makes fans care about all of those wonderful possibilities.

And with the way Suicide Squad ends… It’s very obvious that things in the DC Cinematic Universe are only heating up. Don’t believe me? Stay through the credits.

Suicide Squad is full of action, fun moments, perfect character chemistry, and major plot development for the greater DC Cinematic Universe. Though not without its faults, strong performances in every role and fan service galore make Suicide Squad the strongest of the DCU movies we’ve gotten to this point. If DC can stay on this course, their best films are yet to come.

Harley Steals The Show in the New Suicide Squad Trailer