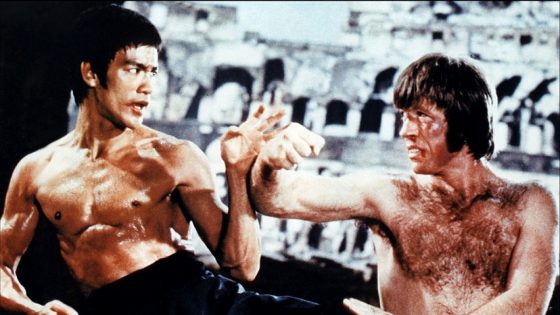 We’re kicking off another year of commentaries here on Everything Action by celebrating Chinese New Year with a little Bruce Lee action in Way of the Dragon:

Lee plays Tang Lung, who arrives in Rome, Italy to help his cousins run their restaurant but the local mob wants to take their property and, when Tang Lung backs them down, they bring in a slew of fighters from around the world, including “7 Times World Karate Champion” Chuck Norris.  Lee and Norris’ fight is the classic scene from this movie, as Lee worked on it for over 45 hours and the pair made actual contact during the fight.  Lee wrote, directed and starred in Way of the Dragon and it was one of the last films he completed before his death a year later in 1973.  A sequel was made with “Bruce Le”, one of the many rip-off martial artists that tried to very unsuccessfully keep the Bruce Lee brand going.  Way of the Dragon is on Netflix and we’ll be checking it out at the end of the month to ring in the Year of the Rooster.

EA Commentary: Way of the Dragon

Movie of the Month: The Saint

Movie of the Month: Kindergarten Cop 2