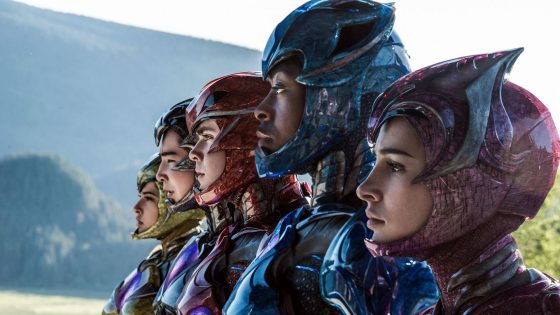 The first trailer for the reboot of Power Rangers featured much more “Teenagers with Attitude” and less morphing and Zords but this new trailer finally shows us what we all wanted to see.  In this new rebooted universe, the Rangers (Naomi Scott, Becky G., Dacre Montgomery, Ludi Lin and RJ Cyler) are high school misfits and outcasts who stumble across ancient power coins in a mountain nearby their hometown of Angel Grove and develop super strength and agility.  Eventually they meet Zordon (Bryan Cranston) and Alpha 5 (Bill Hader) and are told of their mission to defeat the evil Rita Repulsa (Elizabeth Banks) as the Power Rangers.  The Zords and Megazord are on display toward the end of this trailer along with the fully morphed Rangers fighting Putty Patrollers, who are now rock creatures created from the ground by Rita, and Goldar, who is a giant, literally covered in gold, monster.  This looks much better than the various toy reveals we’ve seen since the first trailer but I think we’re all still pretty wary.  Hopefully it’s good and fun and we’ll find out on March 24th.  Check out the trailer below.