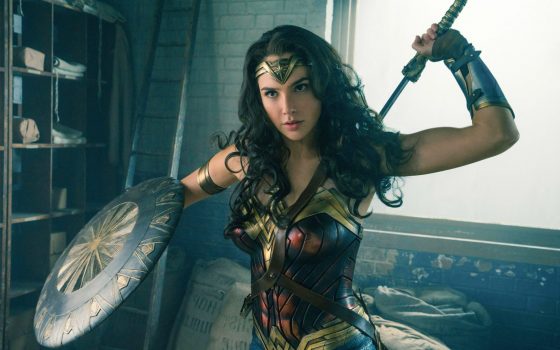 The DCEU has a rough time getting off the ground, at least critically, with both of last year’s offerings being lambasted by the critics and the majority of the internet (we liked BvS and Suicide Squad much more than most).  2017 is off to a much better start for DC/WB as Gal Gadot takes center stage for the fantastic Wonder Woman.

Receiving a photo from Bruce Wayne, Diana reminisces about her arrival into the world of man in the waning days of World War I after American Steve Trevor (Chris Pine), who’s working for the British as a spy, crash lands in the waters around Themyscira and reveals what’s going on in the outside world.  Going against her mother’s wishes, Diana joins Trevor on his mission back to London and believes Ares, the God of War and enemy of the Amazons, is the one behind the war and, if she can kill him, she can end it.  Trevor is determined to hunt down and stop General Ludendorff (Danny Huston) and his chemist Doctor Poison (Elena Anaya).  The plot is fairly familiar if you’ve seen any sort of war movie about a small squad on a mission but the characters are the main focus and both Gal Gadot and Chris Pine are fantastic and have an easy, back and forth chemistry that is the equivalent of Peggy Carter and Steve Rogers on the MCU side of things.  Gadot perfectly captures both sides of Diana, her kind and compassionate side and the side that will fight to the death to protect innocent lives.  The highlight of the movie is easily the scene where Diana sees the suffering going on on the front lines of the war and cannot stand it, so she single handedly charges across No Man’s Land to end the battle.  The action is fantastic and perfectly uses slo-mo to highlight the bad assery of Diana and there’s great use of all the weapons in her arsenal, especially the Lasso of Truth that is both visually stunning and gives her a unique fighting style compared to her Justice League compatriots.  There’s also an incredible battle between the Amazons and Germans on the beach of Themyscira that is also visually and viscerally fantastic and provides Robin Wright a chance to kick some ass.  The only weak spots as far as the action and the plot is the climax as it feels a little bit too prolonged and it’s kind of the dark, messy CGI that a lot of recent blockbusters end on and there are some lulls, especially toward the middle, with some of the character beats and scenes possibly trimmed down a bit but it’s much more focused than the messy and overstuffed BvS or Suicide Squad.

One of the chief complaints of the DCEU is that it’s, arguably, too dark and brooding but Wonder Woman manages to balance out the more serious aspects with the breezy back and forth between Diana and Steve and supporting work from characters like Lucy Davis as Etta Candy, who is just delightful and Diana and Steve’s squad of misfits.  Visually it’s also a departure from the previous DCEU entries, at least in the opening on Themyscira, which is gorgeous and lush, before entering the gray horrors of the World War I European battlefield.  I actually think Wonder Woman has a better balance than say, Captain America: The First Avenger, as it’s more grounded in the realities of the time, while still having Diana throwing trucks and deflecting bullets, while Cap was more a whiz bang throwback where it was more an alternate history sci-fi World War II.  Both are great in their own way and it’s just a matter of personal preference about which style you prefer.

If Wonder Woman is the pivot point of where the DCEU is going, than it seems like maybe the ship has finally corrected it’s course.  There was great stuff in all the prior DCEU movies but, with the exception of maybe Man of Steel, they were messy and trying to do too much.  Wonder Woman is a solid origin story with Gal Gadot perfectly playing Diana as a fierce but compassionate warrior and it features some incredible action and a slightly lighter tone.  If Justice League can keep up the momentum, we should hopefully be in for some great things for the future of the DCEU.