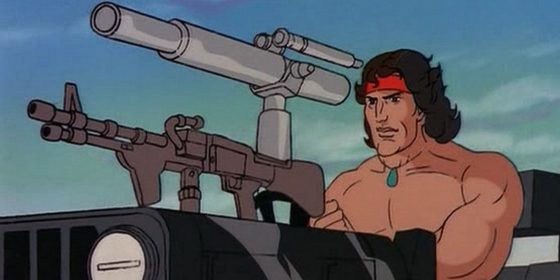 It seemed like in the 80’s and 90’s, no matter how inappropriate, if something was popular enough, it got turned into a cartoon/toy line and Rambo was no different, getting a cartoon series in 1985.

Did I Know Anything Going In?: I knew about the toy line because I’ve seen it occasionally at flea markets or toy shows and I’ve seen the intro in one of those youtube cartoon intro compilations but never saw a full episode and I was 1 when the show aired.

Presumably taking place after Rambo: First Blood Part 2, The Force of Freedom finds Rambo as essentially a one man GI Joe team who is called on by Col. Trautman whenever freedom is threatened around the globe.  That threat usually comes from General Warhawk (Michael Ansara), who leads a Cobraesque team called SAVAGE that consists of Havoc (Peter Cullen aka Optimus Prime), who seems vaguely Russian and is basically dumb muscle and Gripper (Lennie Weinrib), who, in true 80’s cartoon bad guy fashion, has a metal claw in place of one of his hands.  In this first episode, which was Part 1 of a five episode mini-series before the show was fully picked up for a full season, Warhawk and his troops invade the peaceful country of Tierra Libre, which is literally Free Land in Spanish, and Rambo and his team are called in to stop him.  Rambo’s team consists of Turbo, voiced by the late great James Avery aka Uncle Phil aka Shredder, who is an expert driver and mechanic, and Kat, a master of disguise voiced by Mona Marshall, who nowadays is the voice of pretty much every female character on South Park.  It’s worth noting since we’re talking about voice actors that the person voicing Rambo, Neil Ross, is not even attempting the barest hint of a Stallone impression and it’s pretty off putting to not hear that distinctive voice coming out of a, pretty decently realized, animated Rambo.  Alan Oppenheimer, who voices Trautman, does a better job of getting the essence of the movie character but his dialogue is mostly just growling Rambo’s name as an answer to people’s questions.

Anyway, the first objective for Rambo is to stop Warhawk from taking over a bridge over the Rio Hondo river because, if he does, his tanks will have free reign to attack the capitol city of Tierra Libre.  Rambo sets off a bomb to destroy the bridge but is captured by Havoc and left hanging over a snake pit but he escapes and we, surprisingly, get some classic “Rambo stalks dudes in the jungle” scene, albeit in a much more toned down, PG version, with Rambo just knocking out guys or causing them to run away instead of violent impaling or throat rips.  Regrouping with his team, Turbo makes a “tank buster” jeep and Rambo manages to take down a bunch of Warhawk’s tanks and destroys the bridge laying vehicle they used to repair the bridge, permanetely cutting them off from that attack route but Rambo realizes the battle is just beginning…

Rambo: The Force of Freedom is a product of Ruby-Spears, the animation studio who brought you things like The Centurions, Sectaurs, Thundarr the Barbarian and, most appropriately, Mr. T.  This show definitely feels like Mr. T or probably even more so like Chuck Norris Karate Kommandos but loses points for not getting the actual action star for the main role like those two shows.  Not having Stallone or even a decent Stallone impression is definitely a major blow against the show and the animation is a little janky at times although sound wise it matches the movies perfectly as Jerry Goldsmith provided most of the score with some help from, weirdly enough, Haim Saban and Shuki Levi, the men who would later bring us Power Rangers.  If you’re an action fan, you owe to yourself to at least check out the first episode to say that you’ve seen it but it’s not quite as ridiculous or fun as something like Karate Kommandos.