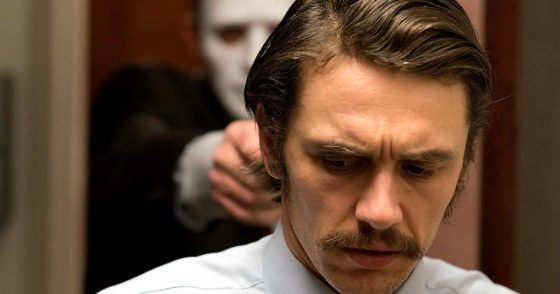 Offering up a combo I don’t think we’ve ever really seen, James Franco (and his sweet stache) stars in the horror/heist movie, The Vault.  Franco is the bank manager at a bank that is hit by a pair of sisters (Taryn Manning and Francesca Eastwood) and their accomplices and he tells them the real money is in the ancient vault in the basement.  When the crooks break into it, something is unleashed that starts to attack them.  Clifton Collins Jr, Q’orianka Kilcher and Scott Haze co-star and it’s directed by Dan Bush, who has directed a bunch of horror shorts and The Signal.  It’s a pretty interesting idea and hopefully the mashup of the two genres results in a fun movie.  It’s out on September 1st and you can check out the trailer below.