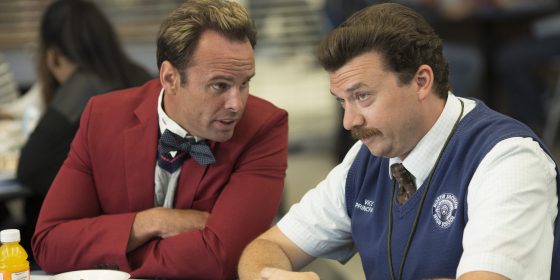 Season 2 of HBO’s hilarious follow-up to Eastbound and Down, Vice Principals, is coming in September and it will dive into the burning question of “Who Shot Gamby?”. At the end of the first season, a seemingly triumphant Neil Gamby (Danny McBride) was gunned down in the parking lot of North Jackson High by a creepy masked assassin and, luckily, he survived and is looking to find out who shot him and get revenge.  His best frenemy Lee Russell (Walton Goggins) is along to help but is also potentially a prime suspect and pretty much all the supporting cast has a decent reason to be pissed at Gamby, so it should be great to see the duo interrogate everyone.  This second season will also unfortunately also be the last season, as the creative team of McBride and Jody Hill announced that fact before the first season started.  The season begins on September 17th and you can check out the trailer below.

Head to Church in August with The Righteous Gemstones (Trailer)