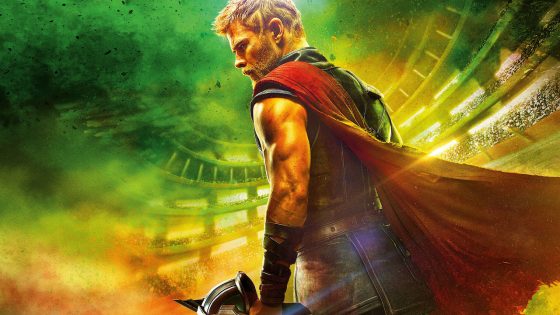 The third and final MCU movie for 2017, Thor: Ragnarok ends things on a high note as Ragnarok isn’t just the best Thor movie by a mile, but one of the best MCU entries, period.

There have been a few dangling plot threads from previous MCU entries like “Where has Hulk been since Age of Ultron?”  “What was the deal with Thor’s weird visions in Ultron?” “Is anyone going to find out Loki is posing as Odin?” and Ragnarok answers and ties all those threads together as Thor (Chris Hemsworth) initially believes he’s staved off Ragnarok by defeating the demon Surtur (Clancy Brown) and uncovers Loki’s (Tom Hiddleston) trickery and the pair find Odin (Anthony Hopkins) with an assist from Doctor Strange (Benedict Cumberbatch) but he’s at the end of his journey and his death allows the deadly Hela (Cate Blanchett), Goddess of Death, to return and she pretty quickly defeats the brothers and puts Asgard under her thumb.  Cast out of the Bifrost Bridge, Thor winds up stuck on the planet Sakaar and captured by the Grandmaster (Jeff Goldblum), who puts Thor up against his champion, the Hulk (Mark Ruffalo).  The plot truly embraces the weirder side of Thor much more than the two prior movies and it’s great that there’s only a slight detour on Earth before going off into the much more fun and exciting cosmic side of the MCU.  There’s definitely lots of Guardians influence here, with Led Zeppelin playing over two of the movie’s big action sequences and a switch to full on wacky comedy but all of that works great and the cast all seem to be having a complete blast at all times.  Where Ragnarok improves on Guardians Vol. 2 though is that it allows its dramatic moments to be fully dramatic  Pretty much every scene that could have had emotional impact in Guardians Vol. 2 got undercut by some random punchline or goofy bit that removed the intention of the scene but Ragnarok plays it smart and lets things like Valkyrie’s (Tessa Thompson) backstory or Odin’s death have the impact they need.

Chris Hemsworth gets to put his great comedic timing that was on display in his side roles in Vacation and Ghostbusters to great use here and gives Thor much more dumb cockiness while still maintaining heroic side and he has some great banter with not only the returning characters like Loki and Hulk but the new characters like a wonderfully surly Valkyrie, the delightfully wacky Grandmaster or his scene stealing fellow gladiators Korg and Miek, with Korg being voiced by director Taika Waititi himself.  Cate Blanchett also seems to be having a blast vamping it up as Hela and the movie does a great job of showing just how insanely dangerous she is, including a fantastic action sequence where she decimate Asgard’s army singlehandedly.  There’s also one of our favorite people on the planet, Karl Urban, who is great as usual as the conflicted Skurge aka The Executioner (He also seems to be doing a Jason Statham impression but that might also just be more of his natural voice?)

After seeing What We Do In the Shadows and other Taika Waititi projects, I don’t think anyone doubted the humor of Ragnarok would be great but the action is equally as great.  The movie opens and closes with some of the best showpieces ever for Thor’s particular powers and the opening sequence also finally fulfilled the promise of Mjolnir, showing off a ton of creative uses for Thor’s beloved hammer in the same way the Russo Brothers cracked the code of how to use Cap’s shield in awesome and creative ways.  The Thor vs Hulk fight also lives up to the hype and has some great comedic moments sprinkled among the bone crunching hits, like Loki seeing the Grandmaster’s champion for the first time and instantly trying to flee or Thor trying to calm Hulk down and getting a punch to the face for his efforts.  The look of Ragnarok is also fantastic as well, with Sakaar absolutely drenched in colors and tons of wacky costumes and bizarre alien creatures and that’s complimented by the incredible synthy score by Mark Mothersbaugh.  Asgard still looks pretty fantastic as well although you don’t really get to see as much of it as we did in The Dark World.

All of this year’s MCU movies have been great and an absolute blast but Thor: Ragnarok might be the best one of the year.  It’s a huge step up from the prior Thor movies and dives into the wacky cosmic side of the God of Thunder that plays to all of Chris Hemsworth’s strengths and gives him a fantastic supporting cast to bounce off of plus some of the best Thor action in any MCU movie.  I’m beyond hyped for Infinity War and also cannot wait to see what else Taika Waititi does now that the whole world knows what a fantastic director he is.

Thor and Hulk Team Up to Stop the Apocalypse in Thor: Ragnorak (Trailer)