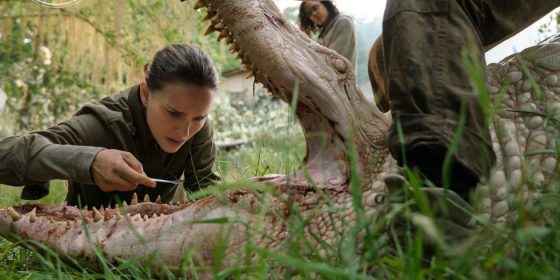 Based on the book by Jeff VanderMeer, Annihilation is the next film from Ex Machina director Alex Garland and stars Natalie Portman as a biologist leading a team into a bizarre area effected by something called “the shimmer”, where strange mutations in the plant and animal life begin to develop and everyone and everything sent in does not come back, the only exception being Portman’s husband (Oscar Isaac), who is dying from some unknown illness.  Tessa Thompson, Jennifer Jason Leigh, Tuva Novotny and Gina Rodriguez join Portman into The Shimmer (also called Area X in the book).  It looks pretty cool with some creepy, disgusting mutations hunting the team and Ex Machina was a smart, thrilling Black Mirroresque story, so hopefully Alex Garland can keep up the momentum from that.  It’s out on February 23rd next year and you can check out the new trailer below.

Natalie Portman Heads into the Unknown in Annihilation (Trailer)