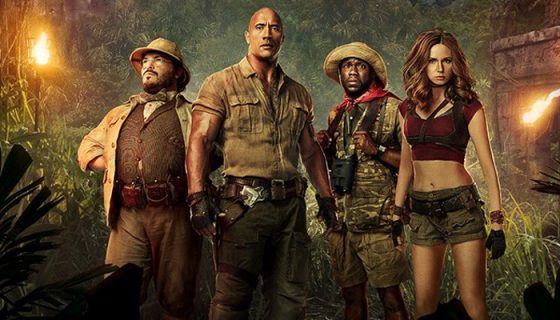 1995’s Jumanji is a childhood favorite of many 90’s kids and the fondness has only grown in the wake of Robin William’s death a few years ago, so a reboot/sequel was being given the side-eye by many fans, even if Dwayne “The Rock” Johnson was involved.  Luckily, Jumanji: Welcome to the Jungle is one of the most fun movies of the year thanks to it’s quartet of stars.

The premise of this new Jumanji is that, back in 1996, the Jumanji board game somehow detected the indifference of it’s latest unsuspecting player and transformed itself it a video game system and cartridge, which sucked that teenager in.  Years later, a quartet of teens find the game while doing detention cleaning up their school’s basement and get sucked in as well, becoming the avatars they chose from the game’s menu.  Nerdy and shy gamer Spencer (Alex Wolff) becomes buff action hero Dr. Bravestone (Dwayne Johnson), equally shy and awkward Martha (Morgan Turner) becomes the gorgeous and ass-kicking Ruby Roundhouse (Karen Gillan), vapid popular girl Bethany (Madison Iseman) becomes the portly Dr. Oberon (Jack Black) and popular jock Fridge (Ser’Darius Blain) becomes Bravestone’s diminutive sidekick, Mouse Finbar (Kevin Hart). They find out that in order to escape back to the real world, they have to return a magical gem to a jaguar statue, which was originally stolen by the evil Professor Van Pelt (Bobby Cannevale), which cursed the land and turned Van Pelt into an insane monster with control over the dangerous Jumanji wildlife.  The plot is pretty standard and simple adventure fare but it helps keep things moving and allows plenty of room for the cast to get into wacky shenanigans and riff off each other.  The Rock, Kevin Hart, Karen Gillan and Jack Black are the key to this whole movie working as well as it does, if there were anyone less charismatic and fun in any of the roles, the whole thing would probably fall apart but they all do a great job of capturing the mannerisms and personalities of the teens they’ve swapped with, especially Jack Black who basically steals the movie as Bethany, committing fully to acting like a teen girl. One of the best and most hilarious sequences in the movie is when Bethany has to teach Martha how to flirt to distract some mercenaries guarding a vehicle shed and both Jack Black and Karen Gillan lean all the way into the ridiculousness of the situation.  The other great thing about the characters, and it’s kind of cliche but it works, is that being in these video game avatars allows the teens to grow as people; Spencer and Martha gain self confidence and Fridge and Bethany gain humility and empathy and there’s a bunch of heartwarming moments sprinkled between the one liners and escapes from peril.  The one thing that definitely does not work though is the villain Van Pelt.  Bobby Cannevale is doing what, to me, feels like some sort of weird “90’s Billy Zane” impression and he’s barely in the movie, definitely not enough to establish any sort of threat or character and definitely not up to the level of the original’s Van Pelt and they establish his control over animals and then never really do anything particularly cool with it.  You could easily remove Van Pelt and just have the random animal dangers and random mercenaries be the obstacles to the main quartet and it would work just as well, if not better.

Welcome to the Jungle also does a great job of playing with the mechanics of being a video game.  The main quartet all have three “lives” and that concept is actually used for both comedic and pivotal plot related sequences and all the side characters they encounter are NPCs with a limited number of conversation options that they constantly repeat (a cameo from Rhys Darby makes the best use of that joke).  Everyone also has specific strengths and weaknesses, except for The Rock who, obviously, has no weaknesses and the movie establishes some really great running jokes like Kevin Hart spouting off random animal facts because his character is a zoology expert, Jack Black being the only one who can read the map they have, Karen Gillan’s main fighting technique being “dance fighting” to Peter Frampton or The Rock randomly dipping into “smoldering intensity” when delivering lines.  Both The Rock and Karen Gillan get some fun fight sequences and while a lot of the action is full of CG and unrealistic, it also kind of works because we’re inside a video game.

Jumanji: Welcome to the Jungle was an extremely pleasant surprise.  It’s a fun and funny light adventure with a fantastic quartet of actors whose charm and comedic chops makes the entire thing work.  If you’re looking for a fun movie to watch over Christmas (and you’ve already seen The Last Jedi possibly multiple times) definitely check out Jumanji.

Jumanji Gets an Upgrade for Jumanji: The Next Level (Trailer)