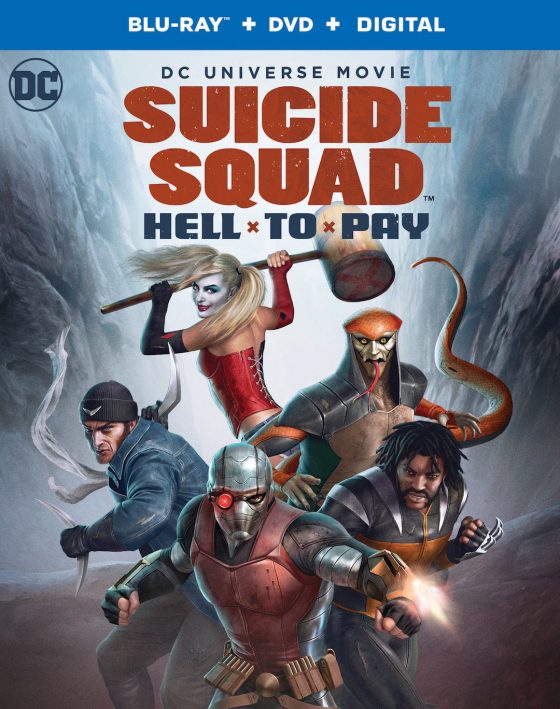 Following after next month’s Gotham by Gaslight adaptation, the Suicide Squad takes center stage again for their second animated feature, Suicide Squad: Hell to Pay.  Unlike the previous movie though, this is not set in the Batman Arkham game universe and instead seems to be a mix of DC Cinematic Universe and comic book universe  (Harley is in a more movie looking costume but Deadshot is not black, Amanda Waller is thin, etc.)  The plot finds Waller (Vanessa Williams) sending the Squad against Vandal Savage (Jim Pirri) to stop him before he recovers an artifact of unimaginable power.  This incarnation of the Squad features Harley (Tara Strong), Deadshot (Christian Slater), Captain Boomerang (Liam McIntyre), Killer Frost (Kristen Bauer Van Straten), Copperhead (Gideon Emery) and Bronze Tiger (Billy Brown) and Savage has assembled his own team that includes Banshee (Julie Nathanson), Professor Pyg (James Urbaniak), Zoom (C. Thomas Howell) and Savage’s daughter Scandal (Dania Ramirez).  Regular DC Animated director Sam Liu is back to direct and it looks a lot better than some of the more recent animated offerings and hopefully can live up to it’s Arkham based predecessor, which was one of the best DC Animated movies period.  Hell to Pay is out on April 10th and you can check out the trailer below.