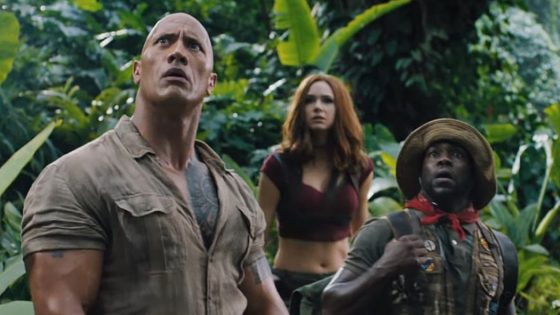 Over a month since it hit theaters, Jumanji: Welcome to the Jungle continued it’s box office dominance, taking the top spot for the third weekend in a row.

Jumanji made another $20 million and dropping about 28% from last weekend, bringing it’s domestic total so far to over $316.9 million, putting it in seventh place for all of 2017.  Worldwide, the movie has made over $768 million and it’s just outside the top 10 for worldwide 2017 totals, coming in eleventh and about $34 million behind Pirates of the Caribbean: Dead Men Tell No Tales.

Two of the new releases both exceeded expectations, with 12 Strong doing the best with a second place finish of $16.5 million.  That’s slightly better than Michael Bay’s “recently declassified” movie 13 Hours but nowhere near the juggernauts that were Lone Survivor and American Sniper.

Den of Thieves was a close third with $15.3 million.  That’s over double what the recent, star studded, heist movie Triple 9 made and also double other January action releases like Sleepless and Broken City.  For Gerard Butler though, it’s his 12th best opening, sitting between Reign of Fire and Gods of Egypt.

The Post and The Greatest Showman rounded out the top 5, with the latter continuing to have ridiculous hold over business, only dropping another 11.8% from last weekend and bringing it’s total to over $113.5 million and over $231 million worldwide.

The Commuter, faced with two direct competitors, dropped from third to seventh with $6.6 million while Paddington 2, probably boosted by it’s 100% freshness on RT, actually moved up from seventh to sixth place with $8.2 million.

The other new release, Forever My Girl, barely made it into the top 10 for it’s debut weekend with $4.7 million.  That’s below every single Nicholas Sparks adaptation released, though this wasn’t one but it still had that vibe.