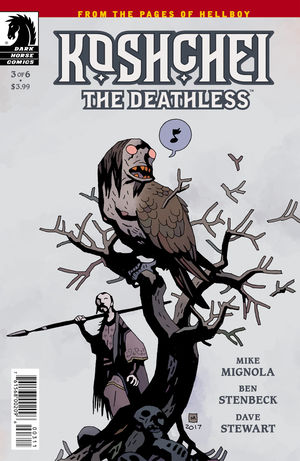 Koshchei’s dragon hunt is almost complete as there is only one remaining dragon in the world. However, it is the same dragon that had given Koshchei his powers. Faced with the a moral dilemma, Koshchei still pursues in completing the agreement with Baba Yaga for annihilation of dragons. In an act of love and respect for Koshchei, the dragon willing offers to sacrifice himself so that Koshchei can find some freedom in the world, but only if Koshchei will return to his castle to spend one last moment together. Koshchei leaves his companions behind and wishes them well to live a life free of horrors that he had brought on to them. Koshchei knows deep down that only a man that has no soul should stand next to him. After some time, Koshchei’s adventures leads him to deal with a creature called the Nightingale, a winged monster that kills any person that hears it’s song. Koshchei tries to grab a glimmer of redemption of his humanity by trying to help people, but cruel fate will bring him to Baba Yaga once again.

The third issue of Koshchei The Deathless shows the real tragedy of Koshchei past. His decision to help Baba Yaga had lead him to betray the dragon that he was once loyal to. The hardships that Koshchei had faced were his alone, and now his actions caused the dragons to be wiped out. This was all part of Baba Yaga plan that only Koshchei was able to perform. Koshchei had lost faith in himself in ever gaining back his soul, and had to begun to lose faith in humanity. Since he had lived for so long as an immoral, all he knows is pain and destruction.

Mike Mignola has lined up the misfortunes of Koshchei to show his tragic anti-hero background, and his path leads him to become more corrupted. It was something that was hinted at in his first appearance in Hellboy: Darkness Calls, but now evolution towards villainy once he makes a deal with Baba Yaga. Ben Stenbeck and Dave Stewart have done an excellent job of keeping Koshchei look pained without having to make dramatic poses. The series keeps it’s horror elements by having some crazy character designs for the monster servants that hang around Koshchei and the warriors that serve in his army. The monsters come in different shapes and sizes, and some don’t even have skin on them. The warriors have a global distinct look that shows how far Koshchei’s legend has spread. All of these characters are really part of the main focus of the story, and the Hellboy series is known for having whacky secondary artwork. Comic fans reading along the series should definite pick this issue up quick to see the next phase of Koshchei tragic past and see what else the Baba Yaga has planned.

Koshchei The Deathless #3 will be released March 6th 2018