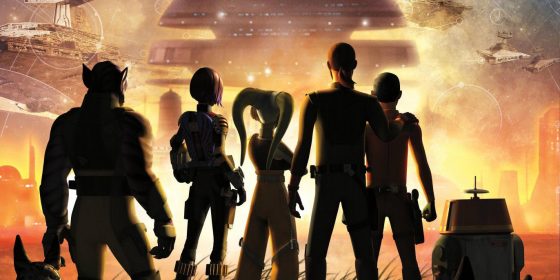 Star Wars Rebels wrapped up it’s four season run this past Monday, ending a chapter of the new canon that filled in the gaps just prior to Rogue One.  Although it was slightly rough going at first and there were some extremely clunky episodes to remind you that this was, in fact, a kid’s show, there were more episodes that were good and some that were some of the greatest and most epic moments in Star Wars history.

Following the crew of the Ghost, Rebels’ main character was Ezra Bridger (Taylor Gray), a young orphan on the planet Lothal that was under the control of the Empire.  He joins the Ghost crew and specifically becomes the Jedi apprentice to reclusive Jedi Kanan Jarrus (Freddie Prinze Jr) after he shows exceptionally strong force abilities.  Kanan survived Order 66 at the end of The Clone Wars and formed the Ghost crew with Hera Syndulla (Vanessa Marshall), which also includes exiled Mandalorian Sabine Wren (Tiya Sircar) and Zeb Orrelios, one of the last few remaining members of the Lasat species, who were decimated by the Empire.  There’s also Hera’s cranky, dickish droid Chopper, who is extremely slow to do anything actually useful. The main issue dogging Rebels in its early days was not having a good focus on the characters. Ezra never really gelled as a compelling main character but in the last few seasons he at least became a proficient, if boring, Jedi but he was kind of whiny and impulsive in the early days (and also seemed designed to be the Star Wars version of Aladdin).  None of the characters or, really, the show, came into their own until probably the second or third season. It’s not that the first season was terrible, it’s just that things were kind of episodic and smaller stakes until the end of the first season and definitely into season 2, when the show become exponentially more “Star Warsy”. Characters like Sabine, arguably their coolest and most interesting character, were pushed on the sidelines and didn’t get any episodes of their own until later on, in Sabine’s case not until all the way to season 3. 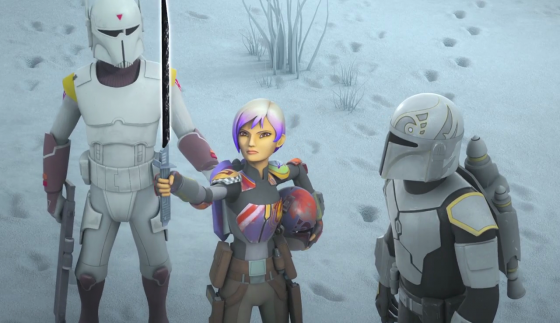 All that being said, when Rebels was firing on all cylinders, it was some of the best Star Wars to ever Star Wars with things like the incredible Season 2 finale that took place in a Sith Temple with a battle against Darth Vader or *spoilers* Kanan’s breath-taking sacrifice in the last few episodes of the show where he uses The Force to hold together an exploding fuel depot long enough for the rest of the group to escape.  The show also really dug into the Jedi lore and is essentially reestablishing what’s canon since the great Expanded Universe purge and Rebels really got into some weird and cool places with characters like The Bendu, an ancient Force being who is neither Jedi or Sith and recently it was revealed a Jedi Temple on Lothal was hiding the most powerful thing in the entire Star Wars universe that would let whoever used it to reshape the entire universe as they saw fit.  The show’s greatest contribution though is probably reintegrating fan favorite Grand Admiral Thrawn back into the proper canon after Timothy Zahn’s Thrawn Trilogy was turned into a Legends series. Played by Lars Mikkelsen (brother to Mads), Thrawn retained all the qualities that made him one of the greatest Expanded Universe characters, most importantly his ruthless efficiency and tactical skills and surpassed even Darth Vader as the enemy who came closest to crushing the Rebellion once and for all. 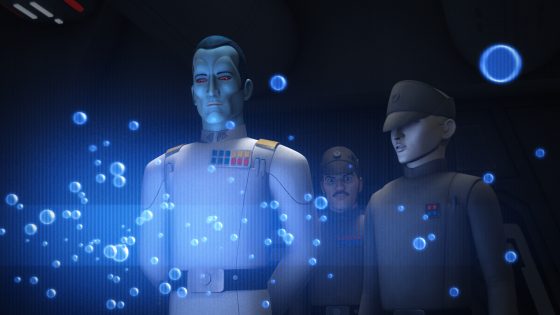 There were also strong ties to the films, with cameos from future Rebel all-stars like Princess Leia, Lando, Wedge Antilles and Mon Mothma along with Imperials like Grand Moff Tarkin and even the Emperor himself with Ian McDiarmid back in the role. After Rogue One’s release, there were also direct references to the future events of that movie with talk of Director Krennic’s project and the use of Death Troopers and even Forest Whitaker showing up as Saw Gerrara. Rogue One slightly returned the favor with Easter Eggs featuring the Ghost as part of the battle of Scarif, Chopper in a quick scene in the rebel base on Yavin and an overhead announcement for “General Syndulla”.

The show also served to offer tons of closure and fan service for fans of Dave Filoni’s previous series The Clone Wars, with characters like Captain Rex, Ashoka, Darth Maul, charmingly devious pirate Hondo (voiced by the great Jim Cummings) showing up and Rebels finally resolving a lot of the lingering questions as Filoni was never able to end Clone Wars like he wanted.  Maul gets an especially interesting and kind of tragic end to his story through Rebels and it’s great to see Rex and the other troopers, who managed to remove the chips in their brains that forced them to execute Order 66, and his gang of old clones are a fun, weird group that helps out the Ghost crew. There’s a really fun episode where Rex, Ezra and the rest of the Ghost crew fight the “last battle” of the Clone Wars when they discover a squad of still active battle droids led by a “super tactical droid” named Kalani.  Rebels was the bridge, especially now in the refreshed Star Wars canon, that linked the prequel era to the classic trilogy era and it did that in mostly great, fun way. 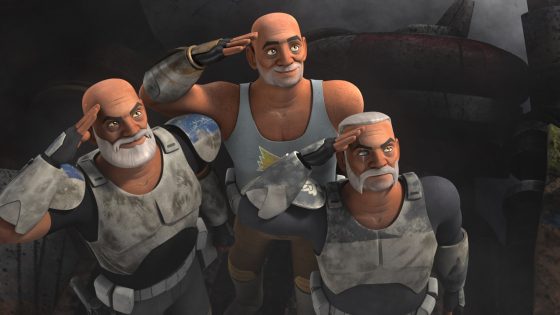 Star Wars Rebels was not a perfect show and there were certain episodes that really let you know that it’s main demographic was young kids and tweens but, more often, there were episodes and sequences that were pure, incredible Star Wars that rivalled anything else in the canon.  After a rough start, the Ghost crew came into their own and became characters that you cared about and they were balanced by some great villains, culminating in Thrawn. If you didn’t watch it but are a fan of Star Wars, definitely take some time in the future to binge Rebels (and also check out Clone Wars as well) and I really hope, based on the final episode, that we get something else with these characters, even a book or comic series, that continues their story, as there’s lots more that can be told and was left open.