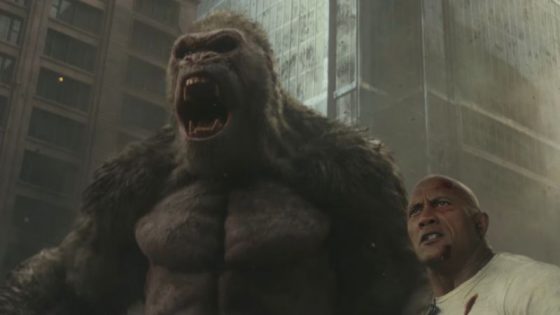 Following up the insanely popular and surprisingly hilarious Jumanji: Welcome to the Jungle, Dwayne “The Rock” Johnson goes from video game adjacent to adaptation with a creature feature loosely based on the 1986 Midway arcade classic, Rampage.

The Rock plays Davis Okoye, a primatologist and former Special Forces commando, who works at a San Diego wildlife preserve, specifically caring for their troop of gorillas and his good buddy George, an albino gorilla he rescued from poachers.  George is, unfortunately, one of three creatures infected by a genetic editing pathogen that crashes to Earth from evil corporation Energyne’s space station (which they built in a cartoonish loophole because their research was declared illegal ON Earth), and it makes him grow at an alarming rate and become increasingly aggressive.  This draws the attention of both Dr. Kate Caldwell (Naomie Harris) and Agent Russell (Jeffrey Dean Morgan), who works for an undisclosed government agency that apparently deals in these kind of things. The plot is incredibly stupid and simplistic but it also moves along at a brisk pace so you don’t really to time to ponder why evil CEO Malin Akerman literally has a Rampage arcade cabinet in her office (Is she a huge fan of the game and wanted to make it real?).  Most of the dumb stuff in the movie though is the fun, charming kind of stupid where you laugh and shake your head, like the increasingly ridiculous list of creatures that each Rampage beast has supposedly been rewritten with or The Rock’s entire “bad ass soldier turned scientist” character.

Speaking of The Rock, the man is literally incapable of not being charismatic but Davis feels like a pretty standard, uninteresting Rock character.  He has a few fun one-liners and a monologue of smoldering intensity and his friendship with George is a surprisingly solid emotional anchor but it’s definitely a step down from the wonderful self-deprecating Dr. Bravestone/Spencer in Jumanji.  Jeffrey Dean Morgan is literally just playing Negan in a suit but, just like on Walking Dead, he seems to be fully aware of how stupid and ridiculous the thing he’s acting in is and goes over the top to match. Jake Lacy and Malin Akerman, despite what their characters are actually doing, are pretty bland and forgettable as the villainous Wyden siblings who run Energyne and the movie really could have used an actor/actress that could go fully over the top and devour scenery.  The movie also weirdly casts some pretty recognizable actors in what amounts to cameos with Marley Shelton and Will Yun Lee appearing and having almost nothing to do with the plot. Joe Manganiello is also strangely not in anywhere near as much as the movie as you have expected from the trailers (I thought he was going to be Agent Negan’s muscle for most of the movie) and *spoilers* he’s actually only in one sequence where he and his mercenary team unsuccessfully try to take down the wolf monster Ralph.

The monster action in Rampage is mostly solid throughout.  There’s a sequence where George gets loose on a plane that is pretty great and the climax where Chicago is once again levelled (Chicago is the new New York for disaster movies) has some good destruction but it kind of pales in comparison to things like Skull Island, Godzilla 2014 and Pacific Rim which, granted, had much higher budgets.  The movie also could have used a lot more of the friendship and teaming up of The Rock and George. They do a solid job of building up their relationship in the beginning of the movie but then lose the thread as George becomes just as mindless and aggressive as the other two creatures for most of the middle part of the movie. When the pair does reteam, they also could have done a little more to have them fight as a team, as it’s more like they take turns taking on Ralph and Lizzie.

Rampage is a solid popcorn movie that delivers the giant monster action you would expect but doesn’t do anything beyond that.  The Rock is still the human personification of charisma but even he seems to be kind of going through the motions and if you can’t accept really dumb plot holes and plot machinations, you’ll probably have a bad time with Rampage.  It seems like a very solid rent or a weekend streaming watch but you don’t need to rush out to theater unless you are a massive Rock superfan/completionist (or if you have MoviePass, which exists exactly for movies like this).

It’s The Rock vs Monsters in Rampage (Trailer)