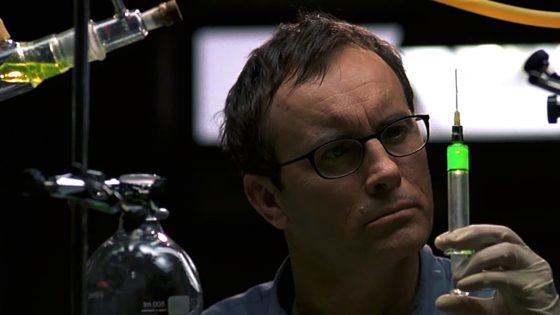 Arguably more insane than anything in 2003’s Beyond Re-Animator or the two prior movies in the series, the seemingly one time only group Dr. Reanimator gave the series the Eurodance theme no one asked for.  Beyond Re-Animator was the third and final film entry in the Herbert West saga where Dr. West (Jeffrey Combs) makes a breakthrough during his 13 years in prison following Bride of Re-Animator and discovers that he can take “Nano-Plasmic Energy” from living people and use it in combination with his reanimation serum to bring back the dead in a way that they are fully back to their original selves and don’t suffer the degeneration to mindless zombies of his previous subjects.  A younger scientist meets West and starts to help with his research and eventually, like the other Re-Animator movies, things collapse into zombie filled chaos.  The song “Move Your Dead Bones” was included as a special feature on the DVD release of the movie, which originally debuted as a SyFy (when it was still Sci-Fi) movie, although they only distributed it.  Besides the Beyond Re-Animator DVD, it seems the only place the song exists is a compilation album called Disco Estrella 2003.  The song itself is insanely cheesy Eurodance in the vein of groups like La Bouche, Haddaway, Real McCoy or Ace of Base and the music video features a man who I assume is the eponymous Dr. Reanimator taking on the role of Herbert West and doing his own experiment while clips from the movie play throughout.  Check out all the cheesy insanity below.