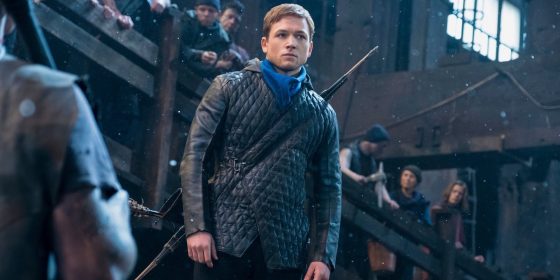 The last time anyone attempted a new take on Robin Hood, it was the Russell Crow/Ridley Scott team-up that was more like a Robin Hood prequel movie but now Kingsman’s Taron Egerton is under the hood for this fall’s big, over the top action re-imagining of the classic story.  Egerton is Robin, who is a former crusader and part of the upper rung of society that is secretly a thief stealing from the rich to give to the poor and trying to help the people overthrow the corrupt king.  Jamie Foxx, Tim Minchin and Jamie Dornan are Robin’s main Merry Men, playing Little John, Friar Tuck and Will Scarlet respectively while Eve Hewson plays Maid Marian and Ben Mendelsohn continues his evil streak by playing the Sheriff of Nottingham.  This looks a whole lot like last year’s attempt to make a cool, modern King Arthur, which we all know failed spectacularly at the box office, along with a healthy dose of Arrow.  British director Otto Bathurst is directing coming off shows like Peaky Blinders and Criminal Justice and he also directed Black Mirror’s first episode, The National Anthem.  The movie is out on November 21st and you can check out the trailer below.