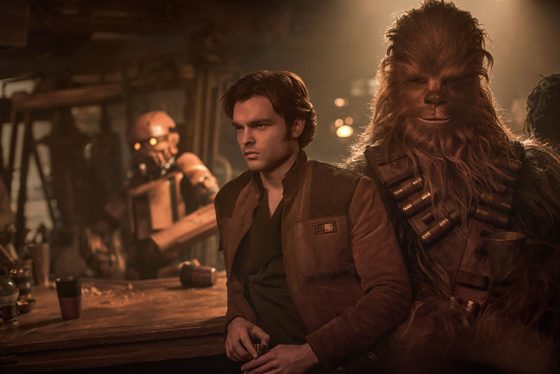 It feels like ancient times when there was a few years or even decades between Star Wars movies but under the global dominating force of Disney, we have the smallest gap ever between movies, as The Last Jedi was out only a few months ago and now we have the next standalone “Star Wars Story”, Solo.

Alden Ehrenreich takes on the iconic role of Han Solo as the smuggler and future Rebel hero is just starting his criminal career, having escaped the streets of Corellia and joins up with Tobias Beckett (Woody Harrelson), a criminal crew leader working for the crime syndicate Crimson Dawn to steal extremely valuable .  Along the way, Han meets his lifelong ally Chewbacca (Joonas Suotamo) and on/off friend Lando Calrissian (Donald Glover). Han’s former love Qi’ra (Emilia Clarke) is involved as well, having been forced into Crimson Dawn to escape Corellia when she and Han were separated years ago. One of the main issues with Solo is that it definitely feels like the least vital movie ever in the Star Wars saga.  Almost all the revelations about Han are extremely heavy handed and not very interesting, despite how long the movie lingers on the first time Han holds his trusty pistol or when the music swells when Han and Chewie see the Falcon for the first time. On the flip side though, there are some tossed off easter eggs that are less in your face that will probably make longtime Star Wars fans grin, like references to bounty hunters Aurra Sing and Bossk and the official canonization of ridiculous martial art Teras Kasi.  There’s also a pretty major cameo toward the end that will require knowledge outside the film series, specifically the animated Clone Wars and Rebels series.

Alden Ehrenreich also doesn’t really capture the magic of Harrison Ford.  He’s charming enough but look and voice wise you’re never really convinced this is the younger version of the rogue we met in A New Hope.  Donald Glover, on the other hand, does nail the oozing charm of Billy Dee Williams and he does feel like the same character who would make a deal with Darth Vader to save his own skin in the future.  The rest of the side characters are mostly fun, although a lot of the actors aren’t really stretching or doing anything too different from their normal thing. Thandie Newton is doing her icy bad-ass thing from Westworld, Emilia Clarke is a slightly softer and lighter Daenerys (but still charming and gets to kick some butt with the aforementioned Teras Kasi) and Woody Harrelson is a slightly less alcoholic and more duplicitous Haymitch.  Paul Bettany is fun as the deceptively chummy Dryden Vos, head of the Crimson Dawn syndicate, who dresses and acts like some sort of nightclub owner but will kill at the drop of a hat. The one truly original and fun new character is Lando’s co-pilot, the droid L3-37 (Phoebe Waller-Bridge), who is an advocate for “droid rights” and fully sentient and gung ho about starting a droid revolution and also houses the most advanced navigation maps in the galaxy.

Despite its flaws, Solo is still a pretty damn fun heist/crime movie in the Star Wars universe.  There are some terrific set pieces, including the Star Wars equivalent of an old Wild West train robbery and a great robbery set-piece on Kessel and the legendary Kessel Run, while probably way more over the top than most fans had built up for themselves over the years, has some great visuals, like weird Lovecraftian space monsters and gravity wells/black holes. I very much appreciate the fact that this movie is fully immersed in the criminal underworld of Star Wars and connects only briefly to the grander Imperial/Rebel war (although there’s an awesome sequence where we see some WWI inspired trench warfare as Han is trying to survive his enlistment in the Empire).

Solo is mostly an entertaining but not important chapter of the Star Wars saga.  You could easily skip it and not miss out on any vital information or backstory but it’s also an enjoyable and breezy adventure that is a lot of fun, especially the set pieces and a bunch of the side characters, if not Han himself.  It feels like the movie equivalent of a solid Dark Horse Comic or novel from back in the day that offers up a fun diversion but doesn’t satisfy like a true new entry in the main story.

The First Trailer for Solo is Here