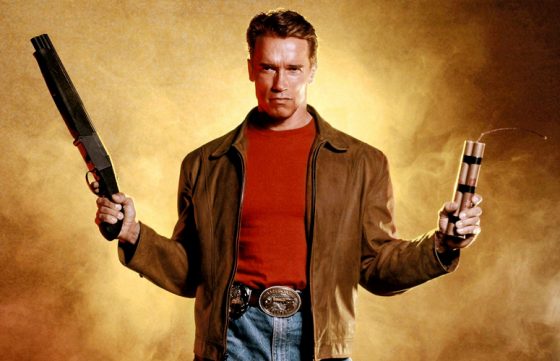 Celebrating it’s 25th anniversary this month, the Everything Action crew is watching the Arnie classic Last Action Hero for our Movie of the Month.

A box office bomb when it arrived in Summer ’93 for a number of factors, probably #1 being it had to go head to head with Jurassic Park but it also spent probably way too long in editing and had an extremely rough reaction from test screenings where Sony actually destroyed the audiences test cards.  The movie was also relentlessly promoted by Sony and Arnold, who was also at peak Planet Hollywood promotion, so critics had the claws out more than normal.  Time has been much kinder though to Last Action Hero and it’s been embraced by action fans as a cult classic and ahead of it’s time for it’s level of meta-humor, which has become one of the prevailing comedy genres in recent years.

Arnold stars as Jack Slater, an over the top action hero who has a series that is four movies in.  His biggest fan is Danny Madigan (Austin O’Brien), who receives a magical movie ticket from his friend Nick (Robert Prosky), that teleports Danny into the world of Jack Slater.  Danny uses his knowledge of movies to help Jack take on the villainous Benedict (Charles Dance), a drug dealer who manages to steal the other half of Danny’s ticket and escapes to the real world to wreck havoc.  Last Action Hero is jam packed with references, cameos and in-jokes to both Arnold’s career and action movies in general and it’s also probably the only action movie in existence that references both Hamlet and the films of Ingmar Bergman as none other than Sir Ian McKellan plays Death from the movie The Seventh Seal.

The movie is unfortunately not currently streaming anywhere, so find yourself a copy and check back later this month to watch along with the Everything Action crew.