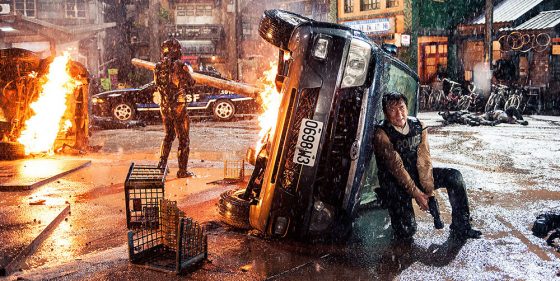 Even though he’s getting into his mid-60’s, Jackie Chan is still cranking out action movies and his latest, Bleeding Steel, has possibly the most insane premise of any Jackie Chan movie previously as it injects a huge heaping of sci-fi into the typical Jackie comedy/action you expect.

Jackie plays Lin Dong, the head of a special police team that is trying desperately to get to the hospital to be with his dying daughter.  He’s called away to rescue a high profile witness, Dr. James (Kim Gyngell), who has developed highly advanced bio-mechanical heart.  Lin and his team are ambushed by Andrew (Callan Mulvey), a cyborg supersoldier that was a previous experiment of Dr. James.  After a brutal battle, Lin seems to have destroyed Andrew but his daughter is dead. Cut to 13 years later, a college student (maybe high school?), Nancy (Na-Na OuYang), is being targetted a mysterious Woman in Black (Tess Haubrich), who is revealed to be working for a wounded but still alive and vengeful Andrew.  Things get incredibly wonky as the movie goes on, with memories imprinted in blood, bioroids, arms dealers, spiritualists and more and the movie’s pacing definitely suffers from a lack of focus and pacing. After a few great opening action sequences, Jackie basically disappears for large chunks of the movie, leaving things in the broadly comedic (and a lot of times painfully so) stylings of Show Lo, who plays Li Sen, a hacker who falls for Nancy after stealing data from an author who has somehow gotten her story as the basis for his latest sci-fi novel.  There’s also a distinct lack of world building going on in Bleeding Steel. It seems like it’s the future but only Andrew and his minions have crazy future technology, everything else seems mostly modern day (Jackie has a slightly advanced touch screen interface in his house and there’s some GPS tracking tech in phones as well). It’s pretty jarring when essentially Power Rangersesque villains are showing up in seemingly normal locations and the movie would have benefited from really leaning into the future craziness.

As far as the action goes, the aforementioned opening action sequence is excellent and is more in line with the gritty Jackie like we saw in The Foreigner or the most recent Police Story as it’s a brutal shootout in the mud with cops getting gunned down and Jackie taking multiple hits himself.  There’s some old school fun Jackie as well, especially a mid-movie sequence that takes place at the Sydney Opera House where Jackie briefly fights off some goons with a variety of magic tricks before getting into a crazy situation dangling off the building’s distinctive roof. The climactic battle is also a lot of fun and it’s almost like a Jackie Chan take on Star Wars, where guys in armor are fighting with laser guns on a giant, high tech space ship.  It’s just a shame that there is a quite a lot of downtime, especially in the opening third following the explosive opening and we’re following characters who are not Jackie and are not very interesting.

Bleeding Steel is solid but mixed bag of a Jackie Chan movie.  There’s both flavors of Jackie action to enjoy in some fantastic sequences but the promise of it’s plot and the trailers was a movie that looked bonkers in the most entertaining way possible.  There’s glimmers of that craziness, especially as the movie moves toward it’s climax but it could have been something special if it leaned into the sci-fi craziness more and less on the mostly terrible broad comedy and characters who aren’t Jackie.  The movie is out now in select theaters and On Demand.