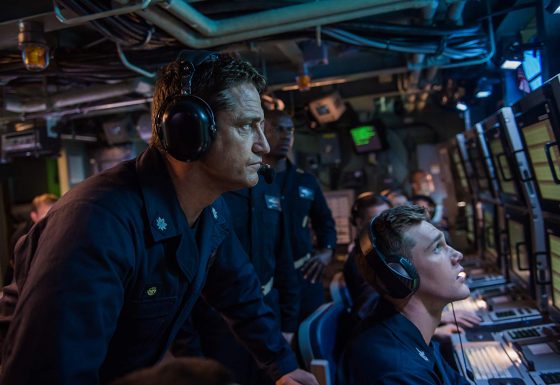 After the ridiculously terrible Geostorm and the sleazy Diet Heat of Den of Thieves, Gerard Butler is back for the firmly mediocre submarine action movie, Hunter Killer.

Based on a novel from 2012 called Firing Point (Ask your dad or grandpa about it), Butler stars as Joe Glass, who is given his first submarine command for a mission with the fate of the world in the balance.  The Russian Minister of Defense, Durov (Mikhail Gorevoy), has initiated a coup, kidnapping Russian president Zakarin (Alexander Diachenko) at their command center and instigating events to try and trigger a war between the US and Russia.  Glass and his sub, the USS Arkansas are sent to the location where both a US and Russian sub went down in the Arctic while a team of Navy SEALs, led by Lt. Beaman (Toby Stephens) are sent covertly outside Polyarny to provide intel and eventually they get a combined mission to attempt a rescue of Zakarin.  The movie’s plot feels like a throwback to the 80s or 90s when the Cold War was still going on and it hits all the familiar beats and cliches you would expect without doing a single thing to distinguish itself. Both the SEAL team action and the sub battles are nothing you haven’t seen before but they are decently staged and executed and there are few tense sequences, like when the Arkansas is trying to navigate through a minefield but something like The Last Ship has done much more clever naval action sequences on a TNT tv budget.

After being a sleazy scumbag in Den of Thieves, it’s nice to see Gerard Butler back to being likable but it seems like he’s maybe trying a little too hard to be a blue-collar American hero, with his character giving three separate speeches about how he’s just a regular sailor, loves America and how he’s done every job he expects his crew to do.  It’s pretty hilarious after a certain point, I almost expected him to crack open a Bud Light or something during an action sequence. Somehow, Hunter Killer assembled an insane supporting cast but most of them really have nothing to do. Common, Gary Oldman and Linda Cardellini are trapped back at the main command center in Washington and are only allowed to grimly give exposition (although Oldman gets a couple decent shouty scenes).  The late Michael Nyquist is one of the standouts as the honorable Russian sub captain Andropov, who along with some of his crew are rescued and brought aboard the Arkansas. He has a dignity and gravitas that elevates things once he comes in and it’s a shame that this is one of his last movies. The crew of the Arkansas isn’t really given any sort of characterization either, not even any archetypes, and they all sort of blend together.  Toby Stephens seems to be having fun as the gruff SEAL team leader and he makes the SEAL side of the mission more interesting at times than the actual focus of the movie, the submarine mission.

Hunter Killer is definitely not something you need to rush out and see and instead feels like the epitome of a Redbox movie as it’s aggressively average but offers some decent thrills.  You’ll be at the grocery store or pharmacy in a few months and be like, “oh yeah, that Gerard Butler submarine movie, I forgot that came out” and then possibly rent it for a lazy weekend viewing.