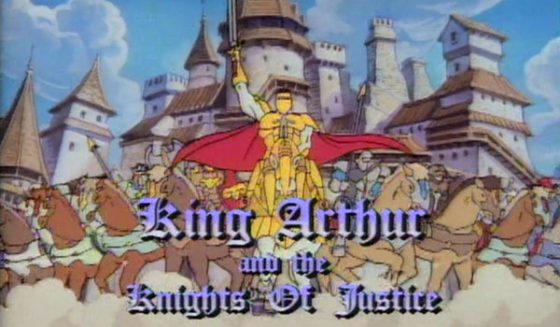 The myth and magic of King Arthur is coming to the modern day this weekend with The Kid Who Would Be King from Attack the Block filmmaker Joe Cornish but back in 1992, football players from the present were transported back to the past to battle evil in King Arthur and the Knights of Justice.  When the real King Arthur and his knights are captured by the evil Morgana, Merlin looks to the future for new warriors to take their place and he finds the New York Knights, led by quarterback Arthur King.  The entire team is transported back in time to Camelot and given weapons and armor with magical abilities and they continue the fight against evil until Merlin can figure out how to free the real King Arthur.  The show lasted for two, 13 episode seasons in syndication and also spawned a video game, action figures and a limited Marvel Comics series.  The best thing about the show though is easily its monster jam of a theme song which had to be a lot of 90s kids first taste of metalesque guitars and lyrics.  You can watch the entire first episode below, entitled “Opening Kick-Off” and there seems to be a ton more on YouTube if you want to keep going.