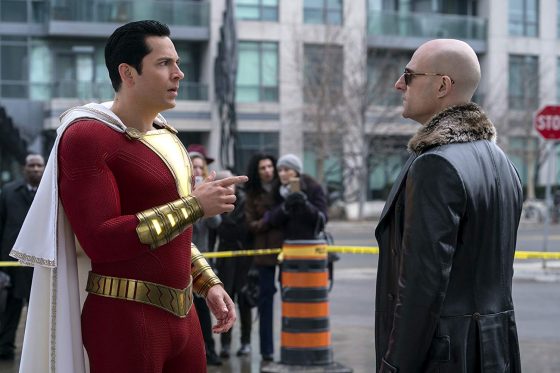 Following up the goofy insanity of Aquaman, Shazam! continues the DCEU’s pivot toward lighter and goofier fun and away from the “Do You Bleed?” darkness that it started with (which we were also fans of but clearly was not working on the critical or commercial level WB wanted).

Asher Angel stars as Billy Batson, a foster kid who has been bouncing between homes looking for his birth mother, who got separated from him at a fair when he was four.  Put into a new home in Philadelphia under the care of the incredibly sweet and loving Victor and Rosa Vazquez (Jovan Armand and Marta Milans), Billy gets a slew of new foster brothers and sisters, including superhero fanatic Freddy (Jack Dylan Grazer).  After helping Freddy against some bullies and getting away on the subway, Billy is called to the temple of Shazam (Djimon Hounsou), who tells Billy he must take on the mantle of champion and save the world from the Seven Deadly Sins, which have been freed by the evil Dr. Sivana (Mark Strong) after he steals the powerful Eye of Sin from Shazam.  Billy transforms into a powerful adult superhero (and into Zachary Levi) and has to learn to control his powers and save the world. The movie does a great job of distilling the magical funkiness of Shazam into the basics so it’s more digestible for casual moviegoers but there’s some deep cut easter eggs and callbacks to classic Shazam for comic book fans, especially in the third act finale.  Most of the fun and laughs from Shazam come from Billy and Freddy trying to figure out Billy’s powers and Billy, at first, exploiting them for his own gain, including buying beer and going to strip clubs. The movie feels sort of like a blending of Deadpool, Ant-Man, and Jumanji: Welcome to the Jungle, with the latter being mostly to Zachary Levi’s great, energetic performance as Billy while Freddy provides meta-superhero commentary and there are some great meta twists on classic but cliche superhero tropes, like the villain monologuing to the hero as they hover over the city.

As mentioned above, Zachary Levi is great as the grown and superpowered Billy, delivering a ton of energy and excitement at not only his powers but his shortcutting to adulthood.  Jack Dylan Grazer, much like he did in IT, is a major standout as well, having great chemistry with both versions of Billy and delivering some smartass quips along with genuine character moments.  Asher Angel gets a little lost in the shuffle as regular Billy and he doesn’t get too have quite as much fun as the rest of the cast as he’s more sullen when not powered up and on his single-minded quest to find his mother.  After taking a break, it’s super great to have Mark Strong back chewing scenery as a villain and he proves why he’s one of the best villain character actors ever, providing genuine threat but also a great straight man to Billy’s goofiness and the Sins that give him his power also have some cool and nasty designs.  The rest of Billy’s foster family are fun as well and the movie gets into kind of a Gooniesesque mode when Sivana targets all of them to get Billy and they have to band together for the third act.

Shazam! Is a fun, funny and sweet superhero movie that has a ton of laughs along with lots of genuine heart and great performances across the board.  It does a great job of transferring the goofy Golden and Silver age charm of the character to modern day with a meta twist and still delivering the big superhero action you expect.  The DCEU definitely shouldn’t become fully goofy but Aquaman and now Shazam proves there could be more than enough room for both tones but who knows what the future holds.