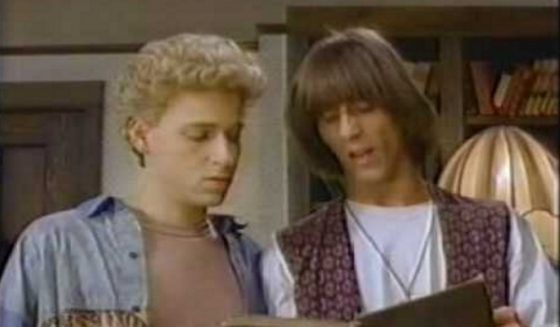 A third Bill & Ted movie is right around the corner but there have been a few attempts to expand the adventures of the Wyld Stallions beyond the first two movies.  There was an animated series that actually featured Keanu Reeves, Alex Winter and George Carlin reprising their roles that lasted for two seasons and 21 episodes but after that show was canceled, a live action TV series was launched that lasted for only one, seven-episode season.  Airing in 1992 during the summer on Fox, the show featured Evan Richards as Bill and Christopher Kennedy as Ted with Rick Overton taking over as Rufus.  The premise of the live-action series was basically the same as the animated series as Bill & Ted, guided by Rufus, would use the time-traveling phone booth to continue their historical adventures and keep the timeline on track for the utopian future they are responsible for creating.  The first episode, which you can watch below, features the guys working at a hardware store called Nail World and having to travel back to Camelot when their boss, Mr. Keilson (Danny Breen), accidentally uses the time machine and inadvertently pulls Excalibur from the stone, being declared king (Diedrich Bader guest stars as King Arthur).

Bill & Ted are Back to Face the Music in August (Trailer)

Everything Action Theater: King Arthur and the Knights of Justice