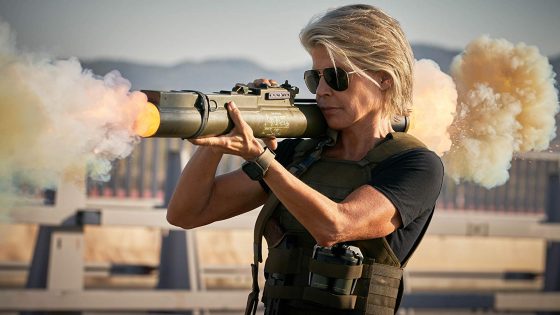 The Terminator franchise has been the very definition of diminishing returns since Terminator 2: Judgment Day, culminating in the mediocre Terminator: Genisys four years ago.  With James Cameron regaining the rights to the franchise, he’s teamed with Deadpool director Tim Miller to hopefully right the ship and make a movie that live up to his original two.  Terminator: Dark Fate pulls a Halloween 2018 and is erasing all Terminator films but the first two from continuity, with Dark Fate picking up years after Judgment Day.  A new advanced Terminator T-1000 (Diego Luna) has been sent back in time to kill a young woman named Dani Ramos (Natalia Reyes), who is being protected by a human/machine hybrid soldier from the future, Grace (Mackenzie Davis).  Sarah Connor (Linda Hamilton) arrives just in time to save them from a T-1000 attack and joins Grace in protecting Dani, recruiting an aged T-800 (Arnold Schwarzenegger) as well.  The new T-1000 seems cool, able to split himself into both a robotic endoskeleton and liquid forms and it’s great to have Hamilton and Arnold back but the action looks kind of cartoonish and this franchise has been driven so far into the ground, it’s hard to get even the slightest bit excited.  Hopefully the combo of Cameron and Miller can deliver and the movie arrives on November 1st.  Check out the trailer below.