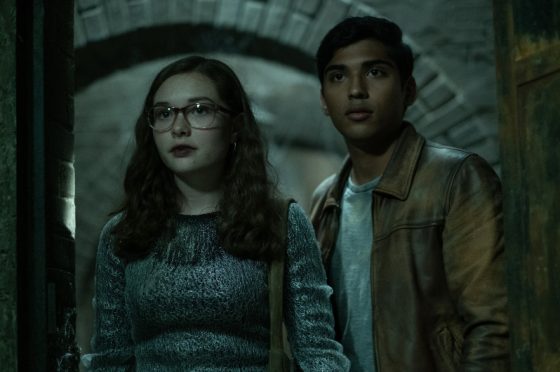 Starting with the teasers during the Super Bowl, every look at Scary Stories to Tell in the Dark has only made the movie seem cooler and creepier and this latest trailer is no exception, giving the best look yet at the scares in store in August.  Based on the infamous anthology books by Alvin Schwartz, Scary Stories is set in 1968 in a small town.  A group of teens enter the local haunted house, the Bellows House, on Halloween and find an old book of scary stories that were supposedly written by Sarah Bellows and the stories allegedly have the power to kill whoever reads from the book.  Although skeptical at first, creatures from the book, like the horrific scarecrow Harold or The Jangly Man begin to appear and any attempts by the kids to destroy the book are unsuccessful.  Zoe Margaret Colletti,  Michael Garza, Austin Zajur, Gabriel Rush, Dean Norris, Gil Bellows, and Lorraine Toussaint co-star and the movie is directed by André Øvredal with Guillermo Del Toro as a producer.  GDT’s eye for horrific creature design is definitely in full effect and it seems like it will pay proper homage to Alvin Schwartz and the art of Stephen Gammell.  The movie is out on August 9th and you can check out the new trailer below.

Head to Church in August with The Righteous Gemstones (Trailer)