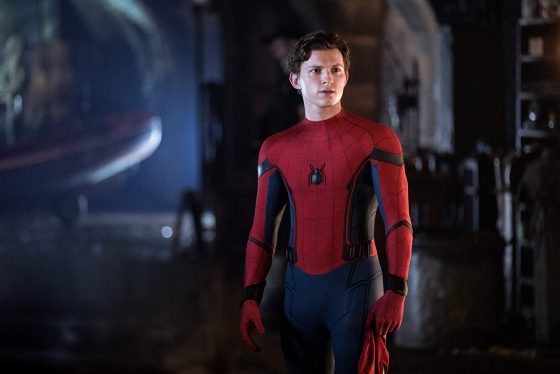 After the awe-inspiring events of Avengers: Endgame earlier this year, Spider-Man: Far From Home feels like the vacation that guides the plot of the movie, fun and funny but also still dealing with the lingering effects of Endgame.

Eight months after the universe was restored and Thanos was defeated, Peter Parker (Tom Holland) and his friends are heading to Europe on a school trip before they have to restart the academic year due to half the students coming back in “The Blip” after five years of being vanished.  Happy Hogan (Jon Favreau), who between trying to awkwardly hit on Aunt May (Marisa Tomei), informs Peter to expect a call from Nick Fury (Samuel L. Jackson), who is investigating strange elemental monsters with the help of Quentin Beck (Jake Gyllenhaal), who claims to be a superpowered hero from another Earth.  Peter initially ignores Fury’s calls but Fury gets fed up and hijacks the school trip, pulling strings to “upgrade” the group’s tour and bringing them to cities where the Elementals are likely to appear. The European settings provide some new and fun locales for web-slinging and it also adds to the humor when Peter has to keep up with terrible excuses to disappear from the group.  The big thing that the movie nails is the use of Beck aka Mysterio’s powers. Obviously Spidey fans are waiting for the other shoe to drop through most of the first half but when it finally does, there is one sequence in particular that is absolutely stunning in its execution and easily one of the highlights of the movie. I wasn’t as impressed with the battles against the Elementals.  They were fine and had some cool smaller moments sprinkled throughout but overall, it was just kind of uninteresting CG blasting away at other CG. The impact of Endgame is also done well, although it does treat “the Blip” when everyone got snapped back into existence as mostly a joke when, in reality, it would probably be a horrific nightmare. There’s also a lot about who will fill in the shoes of Tony Stark and Peter being unsure and not confident that it’s him, even though Tony leaves him some absurdly powerful tech.  Speaking of which, as much as I enjoyed the wacky relationship between Peter and his suit AI Karen in Homecoming, it does work better to have Peter have a fairly normal Spidey suit and then have Tony’s tech be a separate gadget he uses.

Tom Holland continues to be the absolute best Spider-Man/Peter Parker and he’s got a lot on his plate this time around from just returning after disappearing for five years to trying to live up to the legacy of his mentor, Tony Stark, to working up the nerve to tell MJ (Zendaya) how he really feels about her.  Holland effortlessly sells everything with awkward charm but is equally adept at showing Peter’s courage and determination as well, even when things seem hopeless. Peter’s main classmates are all back as well (and all were conveniently snapped by Thanos) and all of them do a great job of adding to the humor. Zendaya gets the most new stuff to do as MJ evolves into more of an actual character and not just a quip machine like in Homecoming and Angourie Rice’s Betty Brant also has much more to do this time around as well, entering into a hilariously annoying vacation romance with Ned (Jacob Batalon) (They are one of those couples that call each other “babe” constantly).  Jake Gyllenhaal is great as Mysterio and, even though Spidey fans will know what’s coming, he is so charming and likable it seems like even hardcore Spidey fans may second guess what they know is coming at some point. Jon Favreau, Samuel L. Jackson, Marisa Tomei, Martin Starr, Tony Revolori and JB Smoove are all funny and delightful as well.

Spider-Man: Far From Home is the perfect break after the intensity of Endgame and is just all-out fun and funny summer blockbuster.  It does a great job with a classic but crazy Spider-Man villain and Tom Holland continues to be the absolute best version of the character.  The end credit scenes promise some crazy threads going forward and I’m even more excited to see where Spidey goes from here.