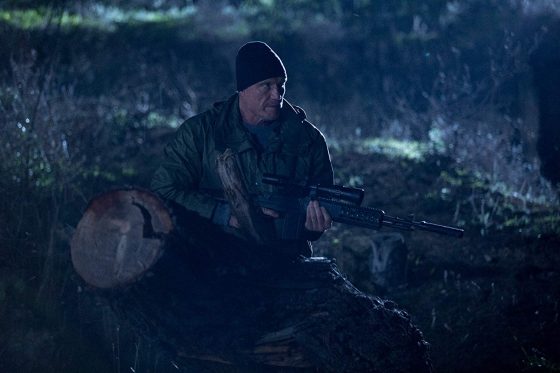 Dolph Lundgren is one of our absolute favorite action stars and he had a hell of a 2018 with the double impact of Creed II and Aquaman.  Dolph is back with a new action-thriller called The Tracker but it, unfortunately, doesn’t use Dolph’s skills to their fullest or meet the bar set by other, recent DTV action thrillers.

Dolph stars as Aiden Hakansson, a mysterious man whose family was kidnapped and killed in Italy.  10 years later, Aiden returns looking to find the man responsible and get revenge.  While Aiden is putting his revenge in motion, Antonio Graziani (Marco Mazzoli) and his very pregnant wife arrive in town, as Antonio is newly assigned to the local police but he quickly becomes involved in what happened to Aiden.  The main issue with The Tracker is that it’s just boring.  The way it’s shot and the pacing makes it hard to keep any sort of interest, especially since there’s an unforgivably small amount of actual action sequences.  Not everything needs to be an action extravaganza but if you aren’t going to focus on action, the plot should at least be interesting enough to keep things compelling but the plot of The Tracker is the most barebones and standard of action plots and there’s not even really any twists or interesting developments.  We know who killed Dolph’s family, Dolph knows who killed his family and the movie is just stalling until the climax, which is not at all worth all the wait.  There’s also no backstory or character development with basically anyone.  The main villain is as generic as they come and we don’t even really know what the deal with Dolph’s Aiden is.  The only backstory is that his father took him hunting once and told him the difference between hunters and trackers but it’s never revealed that he was a hitman or CIA agent or anything and his wife and daughter are such non-entities that you pretty much start the movie off not caring about anything.  Another issue is that while ostensibly the star, there’s an equal amount of time spent with Antonio as Dolph/Aiden, who is not compelling or interesting and he and Aiden really do not have anything to do together until the climax.

As mentioned, there’s only a minimal amount of action in The Tracker and what action there is is boring and uninspired.  Dolph got to do better choreography when he was guest-starring on Arrow and it’s all just flat and lifeless here.  What’s strange is that director Giorgio Serafini has worked with Dolph before on movies like Ambushed and Puncture Wounds and, from what I remember, those were much more fun, old school action movies, so I’m not sure what happened here.  The bar has been raised in the world of DTV action thanks to the movies coming from the likes of Jesse V. Johnson and Isaac Florentine and The Tracker doesn’t even begin to reach those levels.

The Tracker is pretty much a miss on every level.  It puts Dolph into a boring, grim mode and doesn’t have the plot or action to keep any interest going.  I’d say pass and check out some other Dolph movies you may have missed, like Command Performance, Don’t Kill It, War Pigs or Skin Trade.