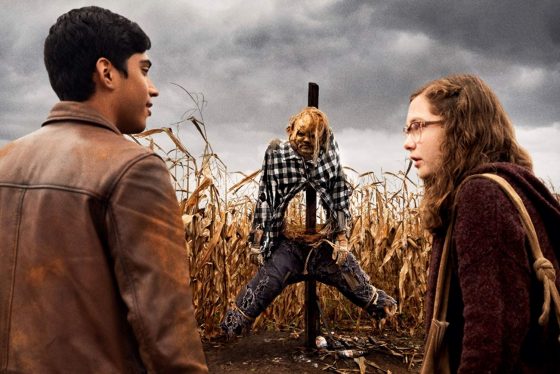 The Scary Stories to Tell in the Dark trilogy of books by Alvin Schwartz intrigued and horrified kids of the 80s and 90s in equal measure with their mix of folklore and campfire stories and the truly disturbing art by the brilliant Stephen Gammell.  The books come to life in a new horror movie from producer Guillermo Del Toro and director André Øvredal that feels like the perfect middle ground between kiddie fare like Goosebumps and more extreme horror like IT.

Scary Stories is set in fall 1968 in the small Pennsylvania town of Mill Valley as the Vietnam war rages and Nixon’s election victory is imminent. Stella (Zoe Margaret Colletti), Augie (Gabriel Rush) and Chuck (Austin Zajur) are teen friends who head out on Halloween and meet a newcomer to town, Ramon (Michael Garza), after they hide in his car after pissing off local bully Tommy (Austin Abrams) with multiple pranks.  Stella leads the group to explore the old Bellows house, which is allegedly haunted by the ghost of Sarah Bellows, who was locked away by her family and was accused of poisoning multiple children after luring them to the walls of the house by telling scary stories. Stella finds Sarah’s book of stories but new ones start to magically form in the book, each one targeting someone they know and the group has to figure out how to stop the stories before they are all killed.  The plot is well-paced but there is nothing really original or unique about it. There have been numerous other horror movies that have had similar plots, the one that jumped out at me was The Ring. The plot is really just a delivery mechanism for the Scary Stories segments, where the horrific creatures and scenarios from the books come to life. These were the main selling point in the posters and trailers and they are definitely the main reason to see the movie. GDT has been widely known as a massive Scary Stories and Gammell fan and his touch is definitely on the movie, as the creatures are horrific, practical nightmares that bring the illustrations to life.  The stories are not 1 to 1 translated but the general idea of the ones featured come across and there’s plenty of disturbing and creepy imagery, specifically the segments featuring The Pale Lady and The Red Spot. There’s also some easter eggs for stories that aren’t fully featured for Scary Stories fans, like featuring “The Hearse Song” as a musical cue. There probably could have been a little bit more focus on how the book and stories actually work, it’s supposedly reading the group and using their fears but then it’s also using stories that they’ve already heard and know and bringing those to life. There’s also some inconsistency about when the stories happen as well, it starts out that there’s one every night but then it kind of just seems to happen whenever someone opens the book or whenever the evil spirit feels like.  The period setting also doesn’t really link up too much thematically and is used mainly for set dressing and cell phone elimination. Ramon’s plot ties into Vietnam but that and the Nixon election are kind of just background flavor as the scary stuff starts happening (although maybe those were the real horrors?!).

The cast is pretty great across the board. The main teen quartet are all believable and likable, although not quite up to the level of The Loser’s Club from IT or the Stranger Things gang, and there are actual stakes and danger looming over all of them, as anyone of them could be the next target of a story.  On the adult side of things, Dean Norris plays Stella’s dad and does a great job playing against type, as he’s broken and depressed and he gets one really good dramatic scene where he’s on the phone with Stella before the finale. Gil Bellows plays the town police chief Turner and he feels a bit out of place to the tone of the movie, as he’s going very broad and his blatant racism against Ramon feels a bit forced and heavy-handed.

Overall, Scary Stories to Tell in the Dark is a fun little horror movie that brings the illustrations and ideas of the books to life in a satisfying way.  Horror veterans will probably not be impressed by the plot but this seems like the perfect intro for younger fans just getting into horror if they are looking to step up from more kid-friendly horror comedy and into horror proper.  That being said, there’s still some disturbing and creepy stuff for horror fans of any age and it’s worth checking out for the creatures and scary segments alone.