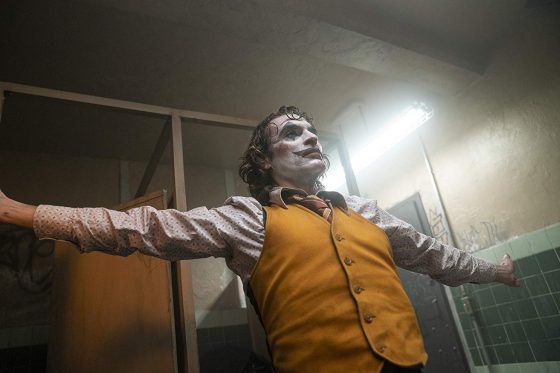 The DC Extended Universe is in a weird spot right now.  Their attempts to rush a shared universe team-up did not work out well with Justice League but there have been bright spots like Aquaman, Wonder Woman and Shazam, which paid lip service to the shared universe but mostly stood on their own.  It seems like WB is going to continue to move toward more standalone projects and, especially with the success of Joker, both financially and critically, that would seem like a smart move considering how good Joker is.

Set in a Gotham City of the 80s crippled by poverty and social unrest, Joaquin Phoenix plays Arthur Fleck, an aspiring stand-up comic who makes his living as a clown for hire.  The combination of increasingly awful things happening to him and his deep-seated, dangerous mental issues lead Arthur to snap and lash out at those who he perceives have wronged him.  Phoenix is incredible in the lead role, giving a deeply disturbing and creepy spin to the comic supervillain while also making The Joker grounded and realistic (his Joker laugh maybe isn’t the best ever but it’s definitely the most unsettling).  It isn’t any secret that Todd Phillips is aping Scorsese and Joker is fully riffing on Taxi Driver and the ilk, with Arthur basically on the same trajectory as Travis Bickle. The rest of the cast is fine but can’t even come close to Phoenix as far as performance.  Robert De Niro is fun as a late-night talk show host but Zazie Beetz has really nothing to do, even though there’s a plot reason for that, and Brett Cullen is maybe the most unlikable Thomas Wayne ever, even compared to the murderous Flashpoint version.

Cinematography wise, Phillips absolutely nails his “80s Gotham is 70s New York” vibe, as the streets of Gotham are absolutely disgusting and unpleasant and, again, much like Taxi Driver, you can almost feel the grime getting on your skin.  There are tons of striking visuals, mostly involving Phoenix disturbingly dancing or conducting the few instances of brutal violence in the movie and the look and feel of the movie definitely matches the dark tones of the story and characters.  The one aspect that doesn’t really work is the attempts to kind of tie-in to Batman mythology and history. You could take out all the Thomas Wayne stuff and the movie would probably be better for it and, as is, it kind of bogs down the second act and takes away time that could have been given from more of Phoenix in full-on Joker mode.

Joker is a bold and dark experiment that definitely paid off.  It’s not the classic Joker a lot of fans want or expect but it works as a character study of a disturbed and dangerous individual that is on the path to becoming the most infamous villain in comic history, anchored by an amazing Joaquin Phoenix performance.  Hopefully, we’ll get many more interesting takes like this on classic DC characters if DC/WB continues this trend of stand-alone films where the directors get full reign.