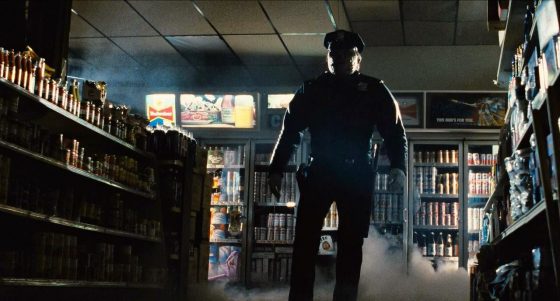 It’s not clear what the newly announced Maniac Cop HBO series will have in store but one thing Nicholas Winding Refn should definitely bring back is the Maniac Cop Rap from Maniac Cop 2.  Performed by Jay Chattaway and Peter Levin over the end credits of the movie, the song is a perfectly cheesy piece of movie-related rap that is easily in the same league of the best of Will Smith or Bobby Brown.  The song recaps the entire movie, but actually more of the just the general premise of the entire series, and has funky beats and great little bits like vocal additions from the Maniac Cop and some delightful rhymes like, “shoot him with an uzi/but he’ll show up in your jacuzzi”.  Jay Chattaway was actually the composer for the score of the movie as well as the first Maniac Cop and went on to score shows like Star Trek: TNG, Star Trek: Deep Space Nine and has done other films like Invasion USA and Braddock: Missing in Action III.  Unfortunately, there’s not an equally cheesy music video to go along with the song but you can listen to the whole thing below.